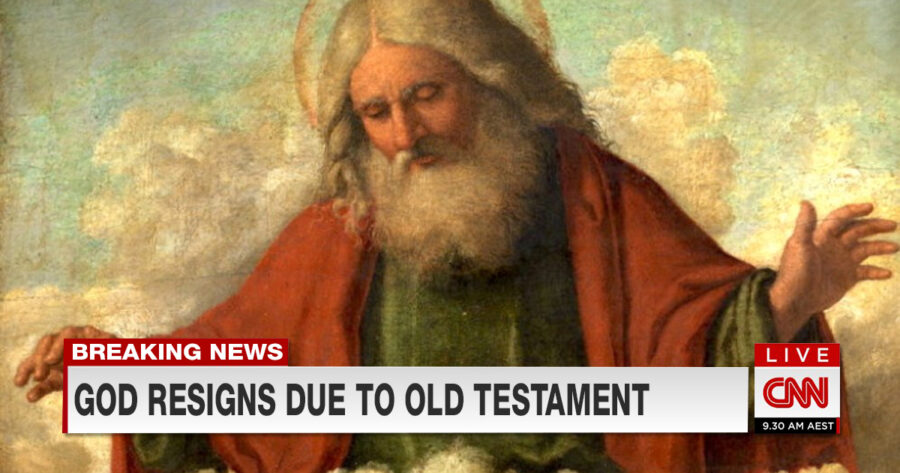 HEAVEN — Succumbing to public outcry after the shocking discovery of an Old Testament written by Himself, God, the Father Almighty creator of Heaven and Earth, announced that He would be stepping down from His post effective immediately.

In a statement written on two stone tablets that were brought down from a mountain by His lawyer, God attempted to explain the scandalous events featured within the rediscovered texts.

“I was a young, edgy God back then. I thought it was funny to make people do things like almost sacrifice their children to Me or kill all the firstborns of Egypt. I have grown a lot since then,” the almighty creator of Earth explained in His statement. “Even though I grew out of that childish mindset — and My believers can speak to that — I still published these views and never retracted them even though I had over a millenia to do so.”

“Despite being an omniscient being I did not see the error of my ways until now and for that I must resign,” the tablets went on to say. “I may have once advocated for things like stoning women who commit adultery, but I am still very much down with the #MeToo movement.”

The apology drew mixed reactions; many fans of God complained that the apology was not strong enough.

“How can He claim to be young when those statements were made when He was as old as the universe itself? At that age, He should have known better than to encourage slavery. That isn’t a mistake or a joke,” said Twitter user @jesusfreak91. “I just hope He has truly changed His previously hateful views and does outreach to the gay, black, and wives turned to salt communities.”

Despite criticism, however, there were also many who defended His actions and statement.

“Obama wasn’t even for gay marriage in 2008, so it is a bit ridiculous to expect God to have evolved on that issue back then, especially when He doesn’t even believe in evolution.” Reddit user u/PM_ME_YOUR_BIBLE_VERSES argued in a thread.

Though no replacement for the Alpha and the Omega was announced at press time, a Change.org petition that demanded Thor: Ragnarok director Taika Waititi be installed as God had reached over 50,000 signatures.