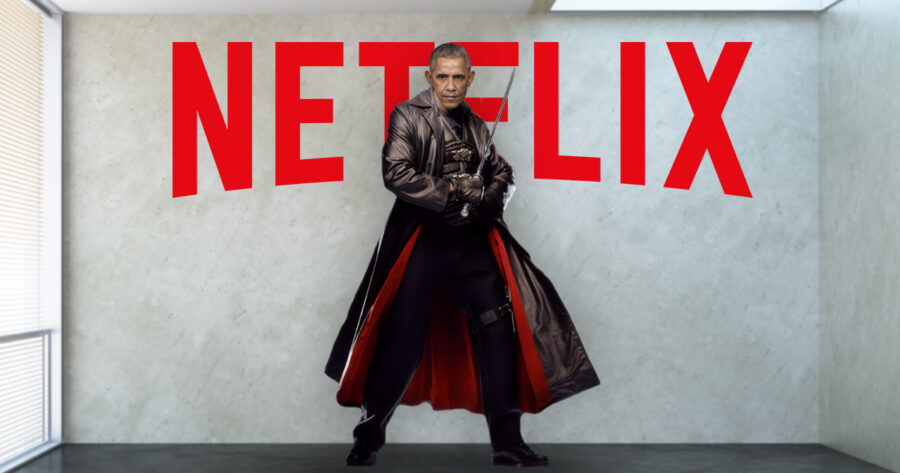 LOS GATOS, Calif. — Early yesterday morning, a sword-wielding Barack Obama interrupted a meeting of high-ranking Netflix executives while wearing a tight leather trench coat, black sunglasses, and an Uzi strapped to his hip to cast himself in the lead role of a Blade TV series written by him.

The announcement by the 44th President comes after a recently signed multi-year deal with the streaming service giant to produce television projects alongside the former first lady, Michelle Obama.

“Normally we like to be the ones who make decisions like this,” said Wendy Killingston, Netflix’s VP of Original Programming, “But when the coolest president in our country’s history literally kicks down your door yelling in that velvety baritone ‘Blade, motherfuckers,’ and unleashes a trio of ninja stars flying past your head, you tend to just go with it.”

“We were expecting maybe an interview or documentary series, but you know, this is cool too.”

Obama, never taking his sunglasses off, presented Netflix with a pitch to seamlessly integrate the character, a half-vampire, half-human vampire hunter, into the Marvel television universe.

“I’m gonna have to kick Dardevil’s ass,” the 2009 Nobel Peace Prize winner explained in his pitch. “I mean Blade does, pardon me. Just to establish dominance. That’s a given. From there, I, Blade, light up Iron Fist.”

Obama continued, “Blade, a job creator, hires Jessica Jones to hunt some vampires. Me and Luke can fight, but it ends in a draw. Oh, I’d like to partner with Night Nurse to provide services to all the heroes free of charge. We’ll call it, just off the top of my head, Bladecare.”

“Also I want a scene of me doing a sick dunk.”

On the heels of the announcement, Hulu reported they would be rebooting Walker Texas Ranger starring George W. Bush.