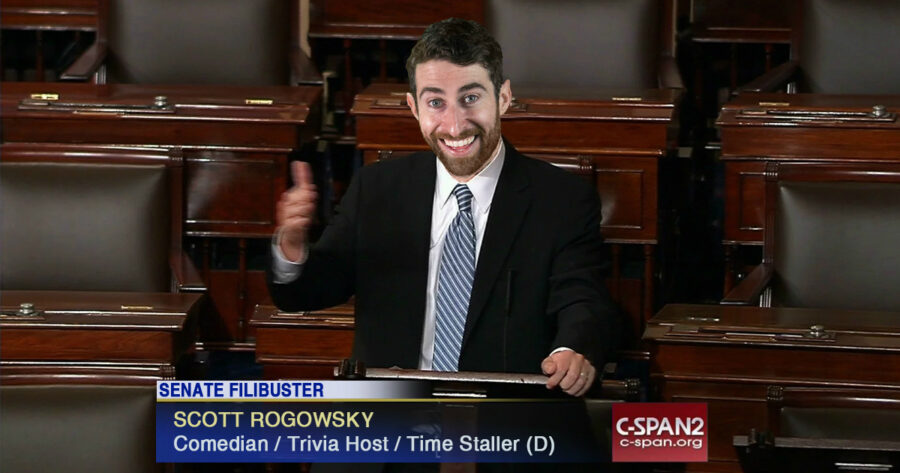 WASHINGTON — Democratic leaders have brought in Scott Rogowsky, host of HQ Trivia, to aid in the filibuster of Supreme Court nominee Brett Kavanaugh, utilizing his patented ability to ramble endlessly, sources have confirmed.

“We knew we had to filibuster this new nominee, but we were having some trouble keeping it going long enough,” said Democratic Senate Leader Chuck Schumer. “I’m sitting there, sneakily trying to play HQ during a meeting, and the host just wouldn’t stop babbling, and as I shouted into my iPhone screen, ‘Just start the questions already!’ That’s when it occurred to me: this might be the greatest filibusterer in all the land”

Rogowsky being brought in to kill time has left some senators conflicted, as they enjoy his banter, but are simultaneously being thwarted in their political agenda.

“I absolutely love watching him work,” stated notorious filibusterer, Rand Paul. “It’s like watching Picasso paint. Just one of the greats. A true artist. An inspiration… though it kinda sucks that he’s the reason we can’t get our judge through the system already. Damn Rogowsky, stop being so brilliant, you beautiful son of a bitch!”

Though the venue and purpose has changed, Rogowsky has yet to indicate understanding the full gravity of the situation.

“I don’t know, they stand me up in front of the Senate and say talk, so I talk,” Rogowsky commented, looking around confused. “I just assumed they were filming HQ in whatever this meeting room is. I don’t know what’s happening, I just keep quizzibustering until they tell me to stop. My quizducer, Quiz Master Triv, hasn’t said anything, so I just keep quizzin’. They hand me a can of La Quiz, and it’s like a French quiz on Quizmas, I’m ready to quiz! Let’s get some Quiznos! HQ-gress will never know what quizzed them. The Quizpreme Quiz Judge, Quiz Bader Quinsberg is presiding, filibusting through the roof. Quiz is in session. Today we declare our Quizzipendence Day! Today I become Bar Quizmah! Where are we again? What’s happening?”

After the Senate decided to take a recess, a cleaning crew was seen carrying a still-rambling Rogowsky outside and leaving him on a sidewalk.