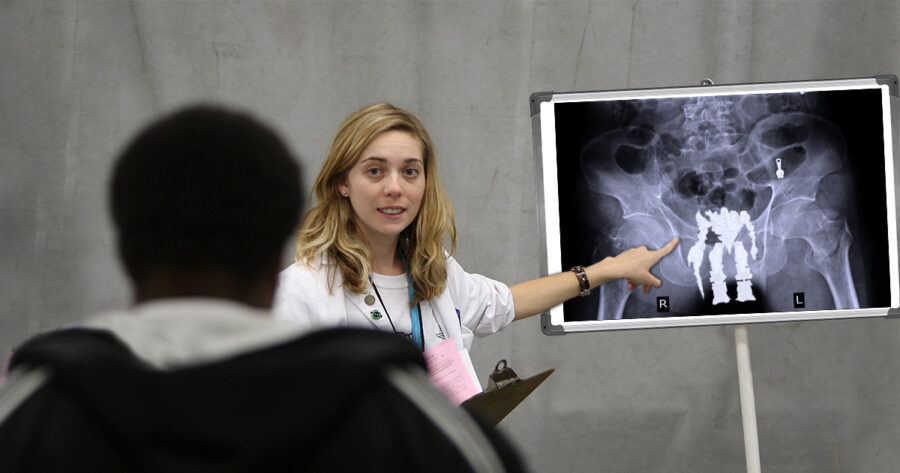 An Open Letter to My Doctor:

I really can’t thank you enough for seeing me today doctor, and I really hate to keep dwelling on this, but I will remind you again, that wasn’t a Megatron toy you just removed from my rectum, it was a Megatron action figure.  Toys are for children, and I am an adult.

You wore gloves, right?  This thing has lost a lot of value since it’s not in it’s original packaging anymore, but as long as you didn’t smudge it up with your fingerprints it might still be worth something. There’s actually a very interesting story behind this particular action figure that I’ll tell you about while I put my pants back on.

Released in 1986 by Japanese company Takara, this was a modified version of their original 1984 Megatron figure made to coincide with the highly anticipated Transformers film.  There were some minor cosmetic changes to the Decepticon leader, most notably the color of the bullets his gun shoots. Had it been the ‘84 model there would be blue pieces discharged inside of me instead of red.

One last clarification before I go, too.  Earlier you said “I can’t believe you got this in there again.” I would be remiss if I didn’t point out that it was an entirely different imported collector’s item lodged in my anus last time.  When I came in on the 4th of July, that was a 1986 Takara Galvatron figure, and while Megatron does in fact evolve into Galvatron in the film, all of the packaging and promotional material treated Galvatron as a completely different character, so it wouldn’t give away the plot of the film.

As such, it was most certainly not the same figurine caught in my ass. It’s a forgivable mistake though, especially since you couldn’t see most of it.

Thank you again for helping me out today doc, you’re really the best.  I hope it didn’t seem like I was coming down too hard on you.  I forget that not everyone is an expert at this stuff like me.  Well, take care, and if all goes to plan I should be seeing you a little after Christmas!