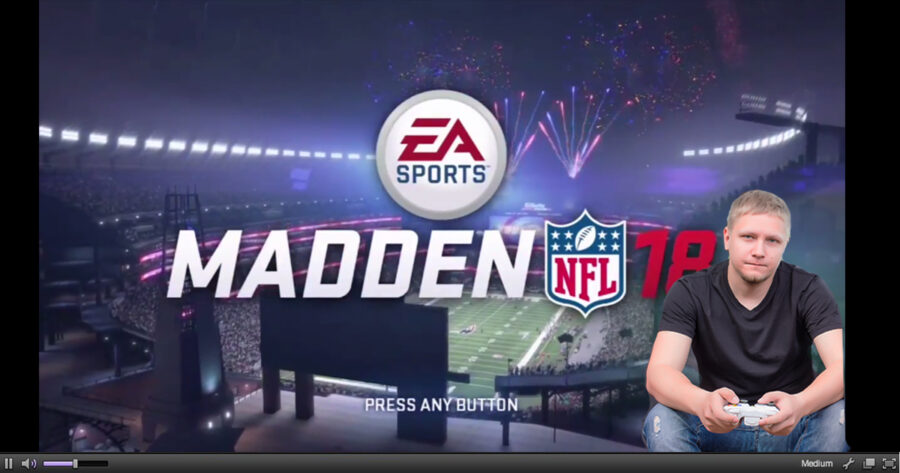 MADISON, Wis. — Local Twitch streamer Todd McCabe has caused an uproar by refusing to stand during the Madden 18 loading screen. The 32 year old gamer enraged a portion of his audience by remaining seated during the thirty seconds of Tom Brady animations that appear prior to the game’s menu.

McCabe further angered detractors by then sitting through the loading screen of an exhibition game between the Jacksonville Jaguars and the Green Bay Packers.

“How can he claim that he knows how to use target passing if he doesn’t even stand for the tips screen?” remarked spectator USAOK_33. “He can play the game any way he wants, but he should really respect the traditions of the Madden franchise.”

McCabe was not shaken by his outspoken detractors and led his Packers to a 72-3 victory. Since then, much of the country has become divided on the protest and whether a loading screen is an appropriate venue for political discourse.

“Hundreds of developers sacrificed a lot so that Todd can play Madden 18,” reported esports columnist Fran Holding. “The least he can do is respect them by standing with his hand over his heart during the opening part of an Imagine Dragons song. Or at the very least put his Xbox controller down.”

On the other side of the issue, political activist Lisa Gerschwitz applauded McCabe’s actions, insisting that he was protesting against the continued injustice prevalent in the current era of the Madden series.

“Many players get totally screwed in their MUT decks and this draws a light to their issues,” she said. “Todd was well within in his rights to make his opinions heard. One can play EA games and still disagree with the brand. It’s what makes us Americans.”

According to McCabe, ever since he started to not stand during the opening credits of Madden 18, no one has accepted him into their online leagues.

“Every time I apply for a position they claim I’m not a fit for their system,” said McCabe, frustrated. “But we are all playing Xbox One so that doesn’t make any goddamn sense.”

At press time, McCabe announced that he has no plans to stand for future loading screens except potentially to microwave some pizza.