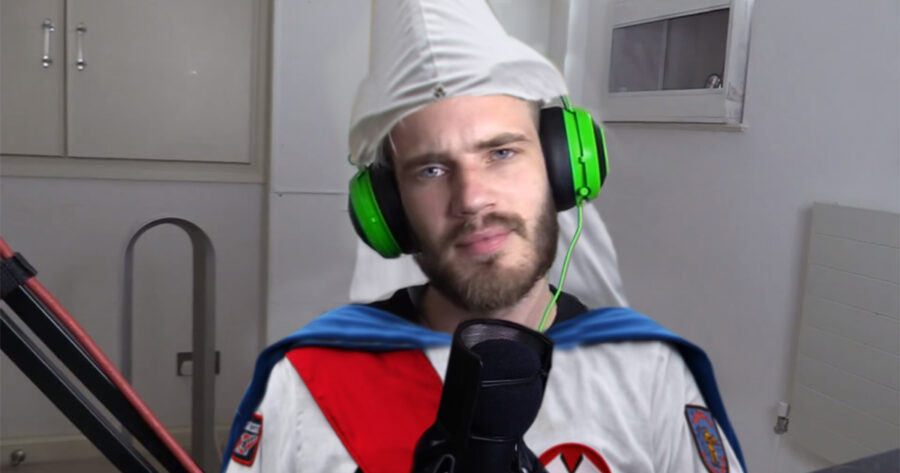 BRIGHTON, U.K.— While streaming a heated match of PlayerUnknown’s Battlegrounds, YouTube celebrity PewDiePie, in a fit of rage over being killed, impulsively put on an entire historically accurate KKK Uniform, today.

The stream, which showed the YouTube celebrity carefully putting on an elaborate KKK uniform for about fifteen minutes in the middle of a PUBG squad match, caused a massive controversy on social media sites within a matter of minutes and led to an apology vlog within a few hours of the event.

“Hey Bro Army. So you might have heard people were a little upset with me yesterday because of a mistake I made,” PewDiePie said in an apology video titled “Woah a lot of people saw me wearing a decked out KKK outfit so I guess I need to say something.”

The video, which was six minutes long, included a recap of what happened over a continuous EDM beat playing in the background.

“Let me just say that I am not in the Ku Klux Klan and also I don’t hate blacks. I was playing PUBG and after I got killed by some obvious stream watcher, so I was just reacting off the top of my head,” PewDiePie said over an image that said “KKK=NOT PART OF BRO ARMY” that accidentally had PewDiePie’s face over the word “Not.”

“I had absolutely no intention of putting on that KKK uniform, piece by piece, while playing PUBG. It was a heat of the moment mistake that happened in a split hour,” he explained to his fans.

Over the course of the video that frequently mentioned how many subscribers he has, White Supremacist puns, and joking how much he looks like he belongs in the KKK, PewDiePie made clear in the video that despite owning a complete KKK outfit with a certificate of authenticity from a noted historian, he does not want to be associated with the hate group.

“I am really not doing a good job with this apology, aren’t I? My haters are going to lynch me. Wait, I probably shouldn’t say lynching in this video, right?” asked PewDiePie of his fans. “Seriously, though, blacks are great and I’m sure a few of them are Bros.”

At press time, PewDiePie was once again under fire for an incident in a new PUBG stream where, after getting run over by a vehicle, he accidentally left his house, booked a flight to Kentucky, stayed in a hotel for three days, and joined a Civil War reenactment fighting as a Confederate soldier.