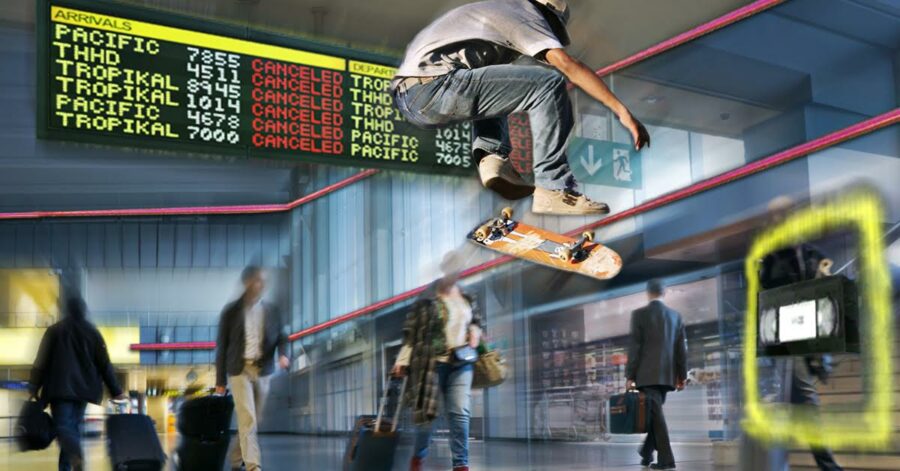 CHICAGO – Skateboarder Scott Sikes discovered a very rare VHS tape while exploring O’Hare International Airport’s best lines and rails earlier this week, putting to rest many years of speculation as to its whereabouts.

“It was crazy,” said Will Palin, a witness on a layover from Orlando. “I’ve seen a lot of people skateboard, but this was nuts. See this light fixture up above us? Dude stopped on a dime, hand planted it for 40 seconds, then fell down and ate fuck. Before I could even check on him he just got up and took off.”

Skating his way to controversy is nothing new for Sikes, who was recently kicked out of his house for his unorthodox skateboarding antics.

“I can’t have him here no more,” said Sikes’ father, Glenn. “Grinding on the power lines and jumping through windows and shit. He has no respect for authority and is always breaking the lights on cop cars with his skateboard. Once he fucked up that construction site across the road, that was it.”

Mr. Sikes had given his son a plane ticket to Phoenix, and was sending him to work a summer job at his uncle’s airplane hangar. “Good luck skateboarding there,” he said, laughing.

While waiting for this flight, Scott grew bored and skated the airport in his unconventional style.

“Dude is nuts!” said Palin. “He was grinding around this baggage claim over here, just around and around. People were a little mad cuz they couldn’t grab their bags, but I thought it was awesome. Next thing I know, he’s up on the third floor, pulling a tape out of his ass. My man.”

The hidden tape is an urban legend in the Chicago skateboarding community. It had been spoken of and sought after for decades, with very little actually known about it, including what footage it contains. (Legendary skateboarder Bucky Lasek has denied claims that footage shows him landing a Christ Air to 900 in Area 51.)

When asked if he’d keep the collectible or cash it in, Sikes said, “I’m gonna sell this thing for sure. Get some new decks, new clothes. Probably buy some stuff on iTunes. I’ve only got like a dozen songs on here and I’m getting pretty sick of them.”