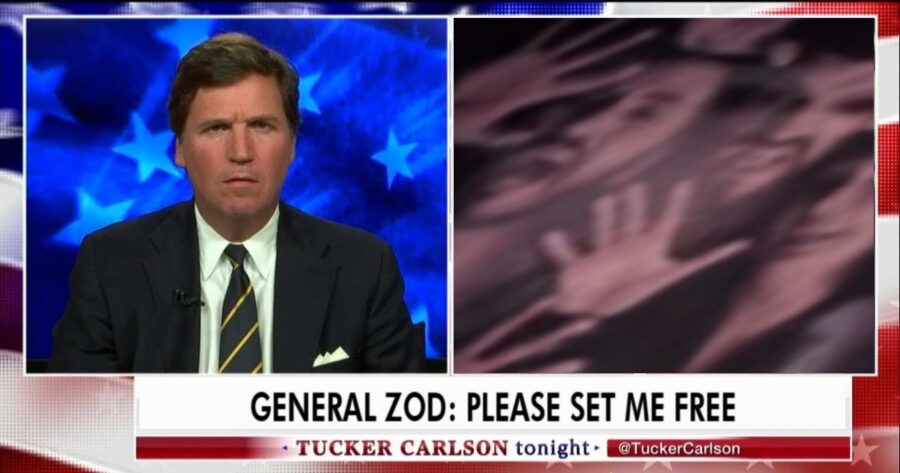 METROPOLIS — After a brutal and bloody battle through the downtown section of the city, Superman defeated the ruthless General Zod and vanquished him to an eternity as the perpetual guest on Fox News host Tucker Carlson’s evening show.

“At first, I was like, woah, who is this liberal in the plunging v-neck?” Carlson said, following a commercial for camouflage-colored colostomy bags. “But then he started making some very good points about leadership and I was one hundred percent on the Zod train. I am not sure if he is Pro-Life but, I tell you, he will restore Law and Order to America when he runs is 2022.”

Zod, however, does not seem to share the same respect for his new compatriot.

“They claim that Kal-EL is this hero of the world but he has banished me to a fate worse than death. He is the villain, I tell you,” Zod said while getting make-up applied before going live. “I have to listen to this H’Raka of a man prattle on and on for hours talking about Rao knows what. And then he contradicts himself ten minutes later. I wish Kal-El just snapped my neck.”

“What I think Superman was trying to do, and this is just one man’s opinion mind you, I don’t know what he may have been actually thinking,” Kent said, adjusting his glasses, “is show Zod where a lifetime devoted to xenophobia and vitriol will get you. I hope he takes the time to reflect on his behavior while he spends the rest of eternity defending white supremacists and billionaires.”

At press time, Zod denounced Carlson live on-air and now claims to be a libertarian.