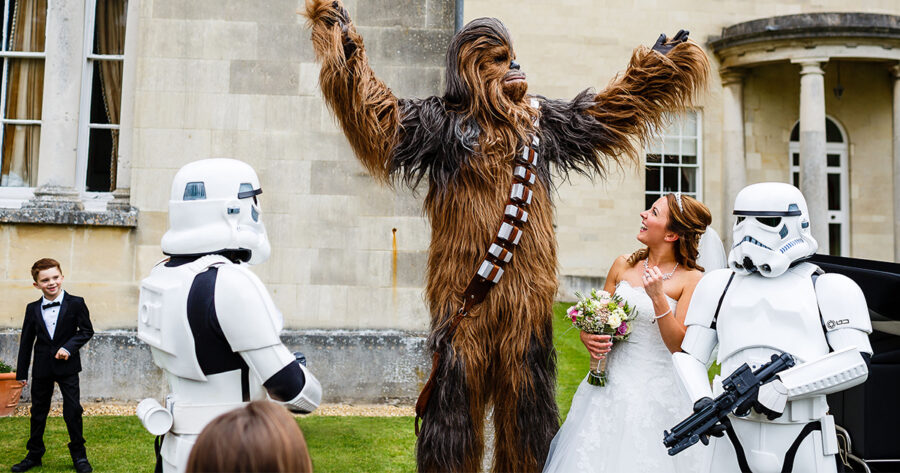 “Beth dressed as Princess Leia and Dan was straight up Chewbacca,” said Kyle Sanders, brother of the bride. “ I know Disney tossed the whole extended universe out the window but this shit is offensive. Plus there’s stormtroopers everywhere?! When the Empire meets with the Rebel Alliance, there are always casualties.”

“Plus, the best man was Luke Skywalker,” Sanders added. “But the guy wore a glove over his left hand. By the time Luke got the robotic hand, he was wearing Jedi garb. This wedding is amateur hour.”

The discrepancy in what constituted appropriate wedding attire inspired Sanders to speak up, insisting the Imperial March be paused so that he may air his grievance.

“You can’t do the blue lightsaber and robotic hand you fucking idiot!” he shouted. “He literally lost the blue lightsaber at the same exact time he lost his hand… Which was his right hand, by the way. I knew I had a bad feeling about you when Beth brought you home!” he continued.

Guests were less perturbed that Sanders was dressed as Han Solo, which implies that he and his sister Beth, should’ve been the ones getting married.

“I was against the theme from the beginning. I told them I wouldn’t pay for a wedding with costumes, but they wore me down,” said the bride’s mother Alice Whetstone. “But if I have to pay the bill for this nonsense, the least they could have done is get the details right. You wanna have a giant slug thing give you away instead of your father? Fine, do what you want. But if we’re spending this kind of money, at least get the details right!”

Many guests reported that the rest of the ceremony was incident free. The reception, however, was marred by ugliness after an altercation broke out between the band and guests over the Cantina Band theme being played in an alternate tuning.