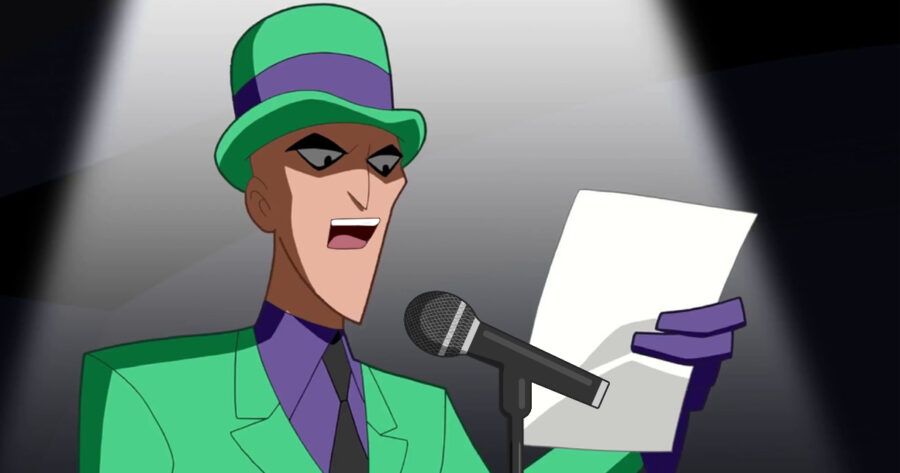 GOTHAM — The Caped Crusader has once again successfully interpreted The Riddler’s esoteric clues and thwarted his latest caper, a stand up comedy set at last night’s open mic at The Funny Bunny comedy club.

“Sometimes I bomb, and sometimes I kill,” read a note written in the sky over downtown Gotham yesterday afternoon, sending Gotham into a frenzy. “Tonight at 9:30, I practice my skill.”

Rejecting his young ward Robin’s hypothesis that a large massacre was being planned at Washington DC’s iconic 9:30 Club, Batman’s correctly construed that The Riddler would be performing at the local comedy club’s Monday open mic showcase, which starts at 9:30PM.

“That’s why he’s the world’s greatest detective,” said Robin. “Not only did he know that the show starts at 9:30, but he also knew that The Riddler wouldn’t get any stage time unless he gets two people to show up. That dastardly fiend!”

Upon arriving and mentioning Edward Nigma’s name to the hostess, the Dynamic Duo were seated in the showroom, where they honored the venue’s two drink minimum policy and waited for The Riddler to strike. After taking the stage eleventh and subjecting the crowd to several hackneyed bits about dating in the big city, Batman sprung into action.

“Oh man, the show was a disaster before that,” said one attendee, a friend of a different performer who wished to remain anonymous. “I was thinking about leaving but I knew it’d be so weird when I saw [my friend] at work tomorrow, so I stayed. Batman really livened this whole night up when he whipped the shit out of The Riddler. I mean he was really giving it to him. He’s the hero this awful comedy show deserved.”

“Definitely made my two-drink minimum worth it.”

When asked about the necessity of force in the incident, Batman insisted he was acting in the best interest of Gotham and its citizens.

“I just saved this city from its biggest disaster since Joker and Harley’s improv show,” he said, referencing 2016’s infamous Larkham! revue and its resulting fallout.