Review: ‘Top Gun: Maverick’ Is a Thrilling Look at the Exciting Life That Awaits You If You Sign the Recruitment Form at the End of This Article 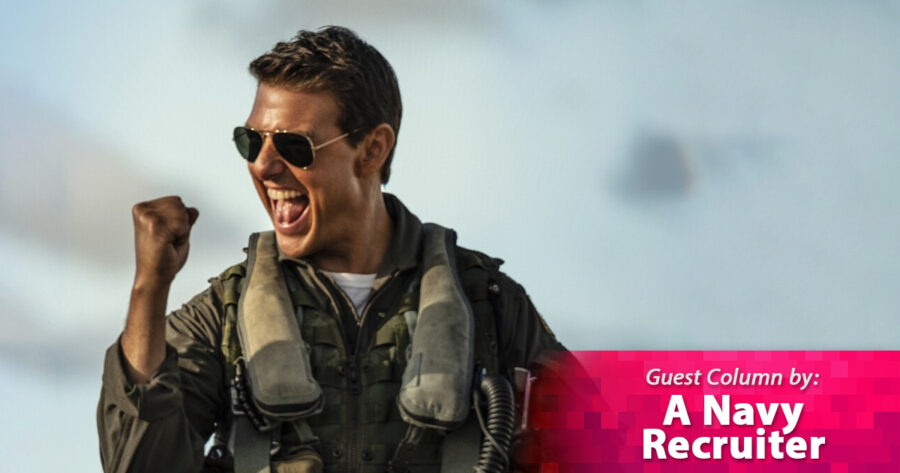 After 36 long years, Tom Cruise is finally back in the cockpit and ready to take off into another blockbuster adventure in Top Gun: Maverick. But after so long, have Cruise and director Joseph Kosinski recaptured the thrills, suspense, and yes, romance that made the original film such a classic? I’m happy to say the film doesn’t disappoint, showcasing the epic widescreen action that awaits you if you sign up with the recruitment form at the end of this article.

The film follows Cruise’s classic character Captain Pete “Maverick” Mitchell as he returns to the prestigious TOPGUN flight school to teach a new generation of fighter pilots. The actor still oozes charisma after all these years. From the minute he first steps onto the screen, you’ll be thinking, “Wow, if I join up with the United States Navy, maybe I’ll be as badass as him one day. And it could be soon, thanks to the recruitment form conveniently placed further down the page!”

The new squad of rookies shine as they’re put through their paces under Maverick’s unconventional training regimen. Miles Teller almost steals the show from Cruise as Lieutenant Bradley “Rooster” Bradshaw, who just happens to be the son of Goose, Maverick’s dearly departed WSO. He actually reminds me a lot of you. In fact, I think the two of you would look a lot alike wearing the uniform of a Navy recruit.

But it’s Monica Barbaro as Lieutenant Natasha “Phoenix” Trace that really stands out. Her dramatic portrayal of a woman pilot making her way in the male-dominated world of the military proves that anyone, no matter your gender identity, can print this review, fill out the recruitment form, and report to basic training at 0800 hours next week.

Make no mistake, this is a movie that needs to be seen in the biggest theater possible. Claudio Miranda’s cinematography really captures how epic it feels to be behind the joystick of a F/A-18 Super Hornet when it’s projected on a 72 foot IMAX screen. The movie’s brisk two hour and seventeen minute run time breezes past and is sure to leave you ready to head to the mall Navy recruitment center next to the Sbarro. Tell them I sent you!

The movie isn’t without its flaws, however. Some of the slower scenes can be just a tad melodramatic, and sometimes present this strange idea that people might not be happy in the military. The film also presents Russia’s Su-57 plane as a credible threat to the United States, when in reality our military is so powerful that we don’t need to fear anything. In fact, you probably won’t even be deployed if you sign up today with the recruitment form at the bottom of this article!

What more is there to say? Top Gun: Maverick is a triumph. It’s a perfect example of a summer blockbuster, a surefire crowd-pleaser that will have you saying, “give me that recruitment form, already!”

Next Week: We look back at “Hot Shots” and show you what it’s really like to be in the Navy!