Review: ‘Superman the Ride’ Adds Nothing to Mythology 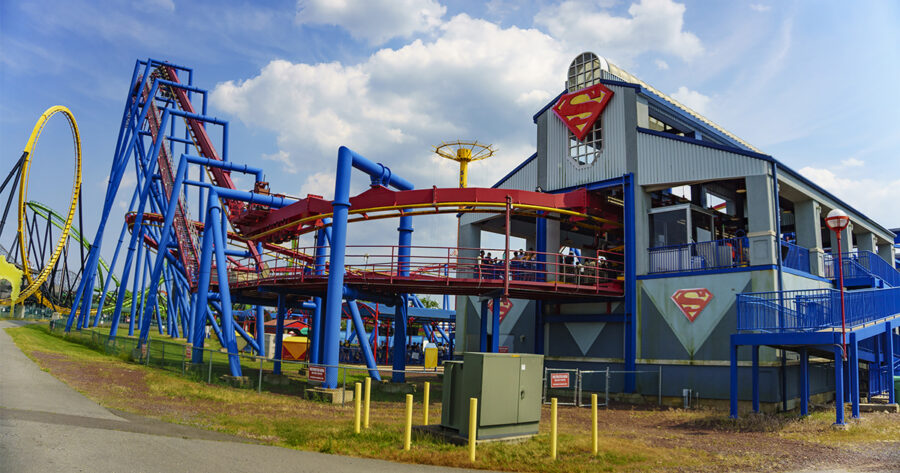 From Star Tours to T2 3-D: Battle Across Time, major theme park licensing deals can provide fresh new narratives for beloved properties. Six Flags’ so-called “Superman the Ride” takes this opportunity and squanders it with a roller coaster that adds fuck all to the Superman mythology.

As a lifelong fan of the DC Universe, my hopes for the roller coaster were as high as the ride itself. Both my body and my expectations would shortly be plummeted to unknown depths.

After a nearly two hour wait with absolutely no discussion of the Man of Steel, it was finally my time to experience the ride totally devoid of any speculation on the nature of ultimate power. We went up the 208-foot hill and plunged down toward a plywood mural of Superman, and it occurred to me that this would have been a perfect opportunity to reconcile Superman being a champion of truth and justice, but who also seems to support the Phantom Zone (a hellish prison whose inmates can view the outside world, but never engage in it), and yet there was absolutely no reference to it.

After that, we flew through a “smashed window” at 77 miles per hour. Were there people in that building? Will Superman spend years agonizing over the lives potentially lost in his pursuit to save the world? Had they let me create the ride, you bet your ass he would have, because if you’re going to make a Superman roller coaster, it absolutely needs to be true to the character.

Near the end of the ride, there’s a large mock up of the Daily Planet that reads “Superman Defeats Bizarro.” Was this whole ride supposed to be a fight between Bizarro and Superman? Were we Superman? Was this ride designed by David S. Goyer? Because it’s obvious to me whoever wrote the twists and turns had absolutely no idea how to jump into the mind of the last son of Krypton.

Superman isn’t just a name you slap on any old thing; it’s a legacy. If these theme park owners think we’re just going to sit by while they shit all over that legacy, they have another thing coming.

Aside from not adding to the mythology of Superman, the ride was pretty fun and I’d recommend it to anyone in the Springfield area. I give this ride a 6/10.