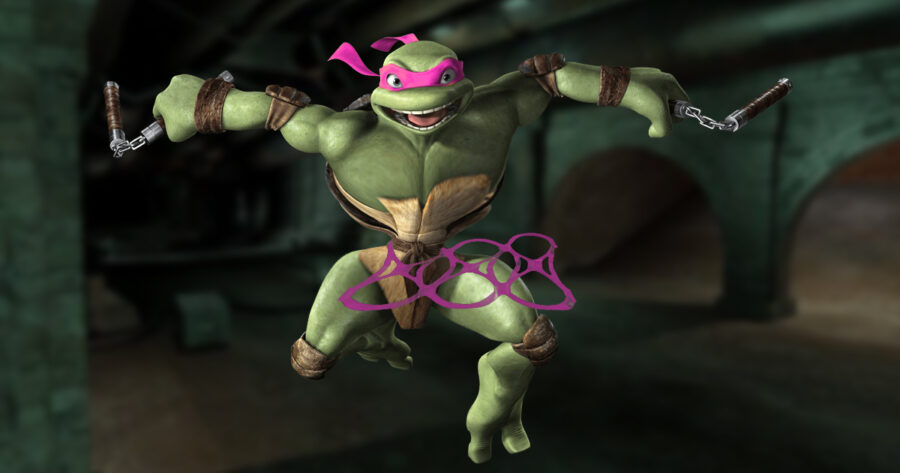 Lifelong fans of the Teenage Mutant Ninja Turtles were shocked today, as Master Splinter revealed to the world there are actually five turtle brothers in his surrogate family. Kurt, the fifth Ninja Turtle, was revealed to have been stuck in a plastic six-pack ring when the mutating ooze made contact with him and his siblings.

“We have hidden Kurt from the world for too long,” said Master Splinter, speaking to a small group of reporters from beneath a sewage grate. “Just because he can’t do Ninjutsu, speak coherent sentences, and frankly, looks like the stuff you blow out your nose during the apex of a bad cold, doesn’t mean he’s not part of this family.”

Kurt’s four brothers huddled around a tiny sliver of light shining through the sewage grate to give their statements. Leonardo, the de facto leader of the four, was the first to speak.

“It can be very difficult to stay strong in front of him,” he said.  “However, during the early training days, he helped me incredibly, teaching me lessons in effective communication and body language, for he can only say short phrases like, ‘Kurt sad’.”

“Before the mutation, Kurt was always playing in those six-pack rings, trying to get each body part into one of the holes,” added Raphael. “Just a shame that the one time he succeeded was when we were covered in the ooze.”

“I’m so stoked Master Splinter decided to speak up about Kurt, it has been really tough keeping someone so close to our family a secret for decades,” added Michelangelo, noted party dude. “Plus, he can’t really process food, so I get to slam his portion of the pizza!”

“As the brains of this group, I would just like to point out how remarkable it is that Kurt is even alive,” said Donatello, the most educated of the family. “His right arm is attached to his head, we think his left leg just morphed into the shell, and his eyes are surrounded by two of the plastic rings, which actually looks pretty cool.”

As Kurt made his way to the front of the group to address the media for the first time, the turtles shouted in unison, “Pizza!” after getting a mobile notification that their food was out for delivery.

At press time, Kurt was trying to hoist himself upright after being trampled by his brothers like it was Black Friday.