Marvel Reboots Spider-Man Movie During Your Popcorn and Slushie Run 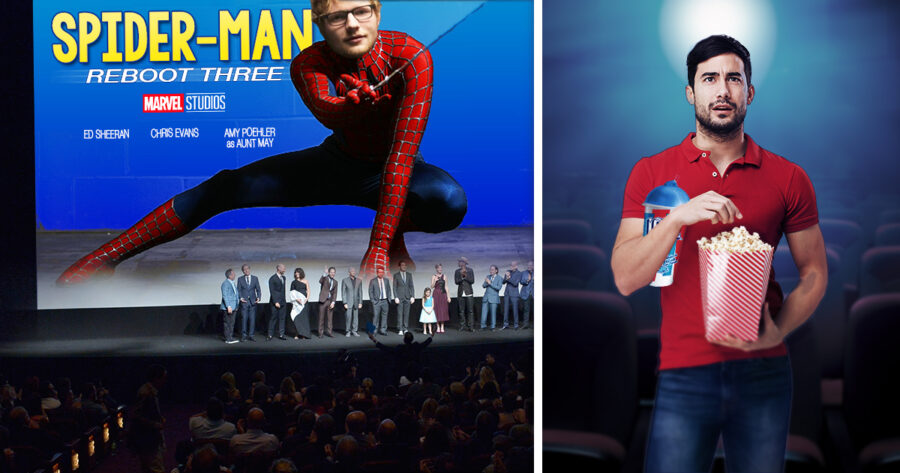 NEW YORK — After leaving to buy snacks midway through a screening of Spider-Man: Homecoming, Liam Brewster was shocked to discover that Marvel had already rebooted the franchise while he was away.

“I knew something was strange when Spider-Man took off his mask and that pasty white guy who plays acoustic hip-hop, Ed Sheeran, was the face underneath,” said Brewster after leaving the theater. “I guess the box-office returns during the hour it was playing Thursday weren’t that great so they decided to go in a different direction with the franchise.”

At a press conference, President of Marvel Studios, Kevin Feige, said he considered several factors before ultimately restarting the franchise 45 minutes into the reboot.

“We noticed a couple people yawning and that could be because they were at a midnight showing, but it’s just not a risk we can take with a billion dollar property like Spider-Man. So we pulled the movie and fired everyone involved.” said Feige while standing in front of a poster for  Spider-Man: This One Has Iron Man AND Captain America.

In an effort to please fans, Feige promised that the film would work with them to get the best version of Spider-Man possible onscreen.

“Right now we are testing technology that will allow us to introduce a Spider-Man villain during the movie and allow theatergoers to instantly vote if they like the character or not. If they vote no, we can automatically erase every scene they are in and replace them with one of twenty alternate antagonists we filmed. We are very committed to making you like this goddamn movie,” explained Feige to a group of reporters.

When asked if he planned to see the newly rebooted series, Brewster shook his head and sighed.

“I wish I could say that I would show my disapproval with Marvel by not buying a ticket but the truth is that if they even hint at Venom in the next movie, I’d pay upwards of $100 for midnight IMAX tickets.”