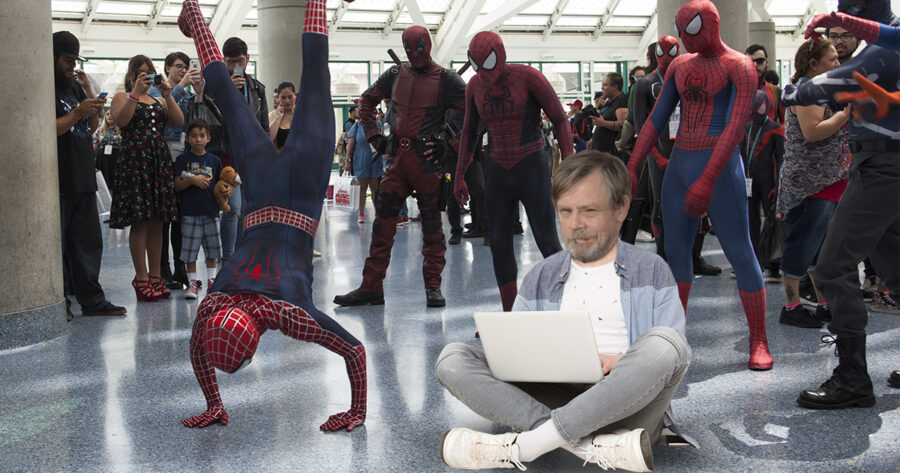 “Oh my god, did you see those dogs over there?” said Cal Schultz, when asked about the inspiration behind his costume, apparently ignoring the question in favor of narrating what he was typing on his phone. “Shout out to Frank Oz! Truly one of the more wonderful people I’ve met on this long journey through the galaxy. Impeach Trump!”

Schultz, a longtime avid cosplayer has been at the convention everyday this weekend in his carefully cultivated costume, which includes a black blazer, black t shirt, and a very convincing pair of blue jeans. Many have reported seeing him wandering the convention halls, taking in many of the sights, but only through the viewfinder of his phone’s camera, posting frequently to the Twitter account set up in anticipation of the event.

“Carrie [Fisher] was absolute magic,” he said, after being asked about the inspiration behind the costume. “It was tragic losing Peter [Mayhew] this year, but I do get a kick out of that big walking carpet getting in her way up there. RIP guys. Hey, look at this old picture of me in Wing Commander! Impeach Trump!”

Schultz was apparently so committed to his personification of the actor, that even when he met his portrayal’s inspiration he refused to acknowledge his presence or even detach his attention from his smartphone.

“I thought it was hilarious!” said Mark Hamill, star of the Star Wars saga. “I tracked him down and tried to tell him he was great, but he just told me to fuck off without looking up from his phone. I’ve never been treated this way at one of these things, and naturally I took to Twitter to voice my displeasure. Impeach Trump!”

As of press time, the two men were engaging in what was rapidly becoming a viral argument on Twitter. Schultz has since revealed that this was his favorite cosplay outfit since he went to the New York Comic Con as Kevin Smith and recorded over 19 hours of podcasts.