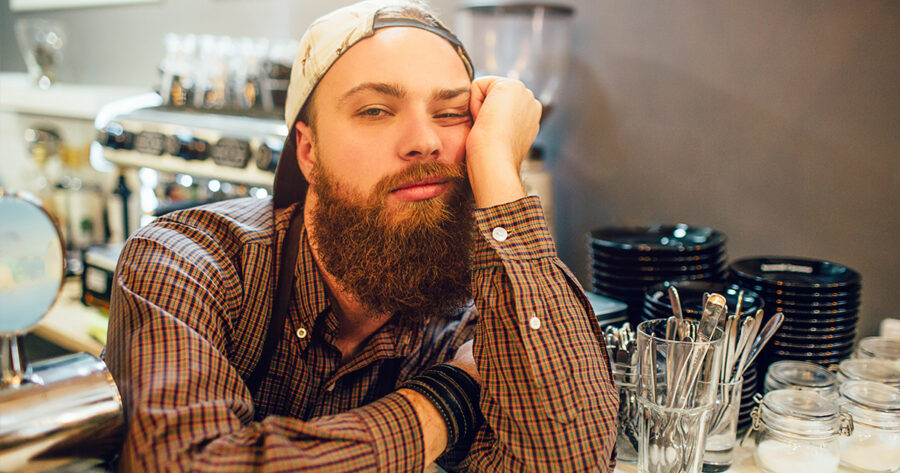 DEER MEADOW, Wash. — Local barista Matt Johnson has found a trick to help him through boring conversations with customers in which he pretends he’s actually interviewing them as the host of a boring podcast.

“All day long, I’ve got people coming and just yappin’ away, right?” Johnson said, reminding us to ‘eat the mic.’ “And, and uhh, I was just telling Jamie this the other day, but the best thing you can do is just think about it like the mic’s hot. Like you’re on, like you’re in the zone kinda deal. Don’t even have to think about it. How we doin’ for time, by the way?”

Johnson claims that he’s developed his method so well that the customers don’t even seem to notice that he’s tuning them out.

“They love it, and like, they don’t even uhh, know they love it,” said Johnson as he reached to adjust headphones that weren’t there, like a ghost limb. “They can meander about the weather or their kids, whatever. And I’m just on freakin’ autopilot. Serving riffs like it’s nothing. Edit that out.”

According to those familiar with the situation, some of Johnson’s regulars, such as local businessman Jared Raab, don’t buy the act.

At press time, however, Johnson’s employers confirmed that he has been terminated from his position due to his customer service performance.

“Matt had plenty of chances. We have a strict policy about conducting personal business on our property,” explained Johnson’s manager Yasemin Sanders. “Telling customers to subscribe to his Patreon and use his MeUndies coupon code is a clear violation of that.”