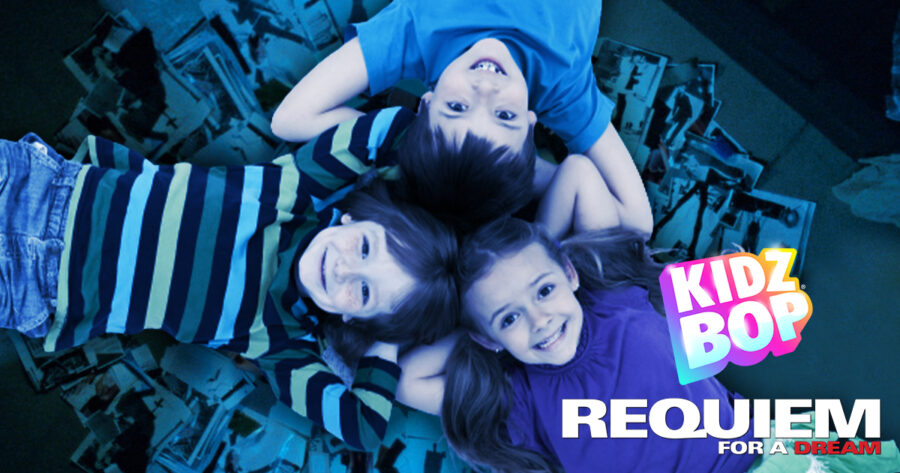 NEW YORK — Branching out from the increasingly less profitable physical music industry, the Kidz Bop company has announced its transition into cinema, debuting with a family friendly remake of filmmaker Darren Aronofsky’s harrowing saga of addiction and loss, Requiem For a Dream, featuring young children in all of the roles.

“Let’s be reasonable here, no one is buying CDs of kids singing contemporary pop songs, at least not like they used to,” Jeff Varnsen, the President of Kidz Bop, who hasn’t released an music album since 2019. “That’s why we’re broadening our horizons and expanding into tackling some of the most thoughtful and cerebral cinema of the last 30 years, starting with that absolute mindfrick of a movie, Requiem for a Dream.”

The project excited many who’d grown up on the audio series, many of which have become parents in the ensuing years.

“It sounded like a horrifying idea at first, remaking Requiem for a Dream with children,” said Devin Carlson, a married father of three. “But the more I thought about it, I think I would like to start introducing my children to the classics. As a kid I was really on my own when it came to great film, and I saw some pretty hardcore Abel Ferrara and Gasper Noé stuff that probably should have been toned down. I’m glad I can expose my kids to the great auteurs without fearing their exposure to violence, swear words, and Jared Leto’s horrifying infection he gets as a result of repeated needle use.”

The scene he mentioned was merely one of many that had been highly altered in order to suit the franchise’s target demographic of young children.

“At first, I was hesitant to let them do this to my film, for obvious reasons,” said Darren Aronofsky, the writer and director of such critically acclaimed films as Black Swan and The Wrestler. “But then when I heard his ideas, like the Tyrone character being hopelessly addicted to Sour Skittles and for Harry to pawn his mother’s television to buy a skateboard, it started to make more sense to me. When I saw the storyboards for the ‘Caboose-to-caboose’ scene, I was all in.”

As of press time, Kidz Bop had announced several more adaptations of films to star child actors expected to release in the following months, including My Dinner With Andre, Grizzly Man, and The Deer Hunter.