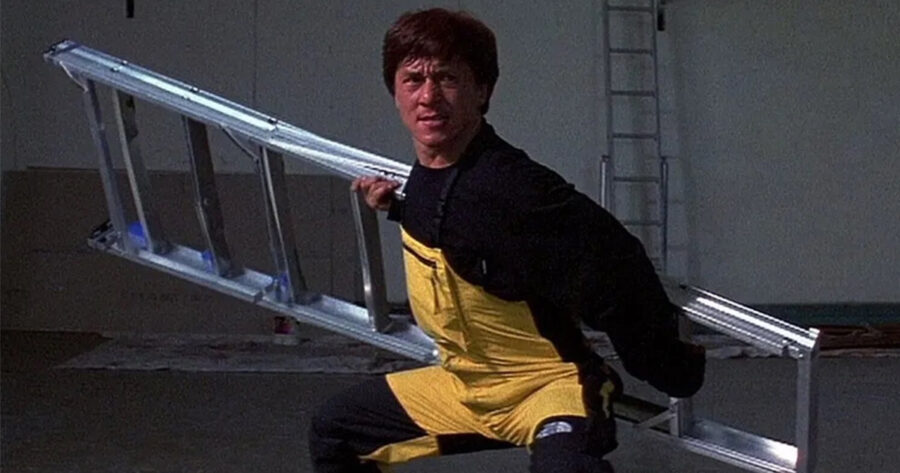 LOS ANGELES — An unfortunate situation occurred today, as self described Jackie Chan “superfan” Dalton Carvey chucked a ladder at his longtime favorite actor, in doomed hopes of recreating one of his many iconic fight scenes.

“I thought he would roll with it, like in the movies,” said a sobbing Carvey, as he was being led away in handcuffs from the scene of the assault.  “I know that movies aren’t real, but that’s why Jackie is the best, because he always did his own stunts. I thought he would appreciate the reference to his work as opposed to the fiftieth selfie he’s been asked to take today. Is he going to be ok?”

Chan was reportedly walking to his car in a parking lot when he caught the attention of Carvey, 35, who grew up watching his iconic performances in martial arts films. The accessibility of a nearby ladder inspired Carvey to enact an impromptu recreation of a popular scene in Police Story 4 (known stateside as Jackie Chan’s First Strike.)

“We were kind of freaking out about Jackie Chan being right there,” said Jesse Plutt, a friend of Carvey’s that witnessed the events. “And then Dalton was like, ‘Hey watch this,’ and grabbed this ladder off the side of a van and launched it at Jackie and then yelled his name while it was in the air. Jackie saw it, but instead of flipping out of its way or catching it and doing some gnarly move with it, he just watched it fly at his face. Poor guy just sank like a stone.”

Lucy Miller, Chan’s personal assistant, claimed that this was merely the latest in a series of dangerous interactions with fans.

“I’m sure they mean well, but I wish they had a better grasp on reality,” she said, shortly after the altercation. “Jackie deals with this stuff all the time. Most actors deal with autographs when they go out in public, poor Jackie has people throwing bottles and swerving cars at him. Much like one of his films, the poor guy can’t go anywhere without it becoming needlessly dangerous. I just hope he’s okay this time.”

As of press time, Chan, 66, was being airlifted to a nearby hospital, after refusing a stretcher and insisting on clinging to a rope ladder hanging from a helicopter.