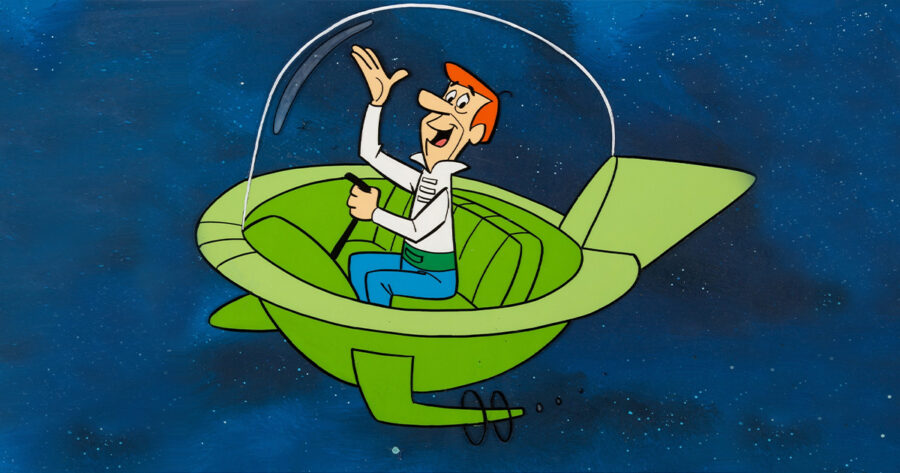 ORBIT CITY — George Jetson, a longtime employee of Spacely’s Sprockets, was overheard by colleagues earlier today as he quietly tried to remember the words to his own theme song before heading home to greet his family.

“It was right about closing time and I heard George muttering to himself,” said Jetson’s colleague and sentient computer, R.U.D.I. “It sounded like he was singing a little song about himself, naming all the members of his family in turn. But every time he got to the part about his wife he stopped and looked confused. I offered to Google the lyrics for him but he got really defensive and threatened to unplug me”

When asked directly about the matter, Jetson only became more agitated.

“I’m a good guy, okay? I love my family and I work hard to provide for them. It’s just the damn alliteration that gets me mixed up when it comes to my wife and daughter. That’s all it is. I know everything else about the people I love,” said Jetson on a phone call from the privacy of his flying automobile. “Our robot maid is an XB-500 model we got on the cheap. My son Elroy’s favorite food is spaceloaf. Hell, I even remember that little springy alien who lived with us for a bit was named Orbitty! But I’ve been addressing my wife and daughter as ‘hey, you’ for the past eight months. I’m in too deep to admit I forgot who’s who.”

Jetson’s boss, Cosmo Spacely, claimed he expected this sort of behavior from his employee.

“I fire that space case Jetson on an almost weekly basis,” he admitted, “but being the nice guy I am, I always hire him back to keep the status quo. He always seems to have some sort of issue. Last week he told me he had a bowling tournament the same day as his wife’s birthday party and he was going to try to attend both. Yeah, I wouldn’t worry about old Jetson too much. He usually resolves his issues in thirty minutes or less before things go back to normal.”

At press time, George Jetson was trapped spinning endlessly on his outdoor treadmill after a mishap while walking the dog, still unsure which name to yell so his wife could stop the crazy thing.