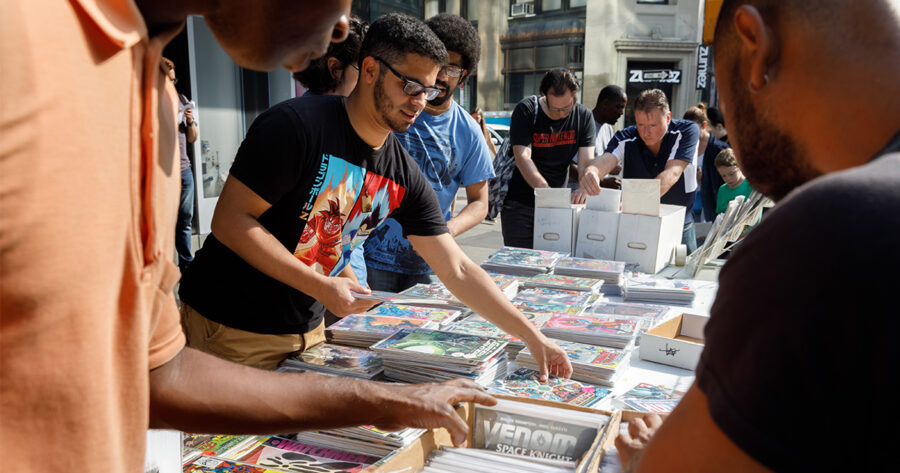 SALT LAKE CITY — All six patrons and two clerks in Salt Lake City’s Moonshot Comics Emporium reported they were grateful to be well-adjusted people, unlike their fellow comic book fans inside the store.

“I’m a pretty normal working dad and husband who just so happens to love reading comics,” explained patron Ben Stinson, describing a feeling reportedly felt by every single other patron as well. “But unfortunately, for every regular Joe like me, there’s ten mouth-breathing, condescending, neckbeards monopolizing the clerk’s time when I’m just trying to get my monthly books.”

“Ugh, that middle-aged, Dockers-wearing fucker is standing by the trades,” said Cole. “[Stinson] is so square and normal, but like, too normal so you know that freak is hiding some dark secret. I have to assume he is in a cult or thinks Jared Leto is a better Joker than Heath Ledger.”

Moonshot Clerk of three years Cary McGrath said he is very familiar with this phenomenon.

“No one hates comic book fans more than other comic book fans,” said McGrath. “Whether it be because of how they look, how they smell, or their supposed lack of comics knowledge, every one of our customers finds a reason to look down upon everyone else who shops here.”

“As an outside observer, I feel safe in saying I’m clearly the most normal one here,” McGrath added, unaware that most of the regular customers know about, and are disgusted by, his perineum piercing.

Jerry Dorf, who has been a Moonshot shopper for over five years, said that he appreciates the ego boost that comes with shopping at the comic book store.

“It’s rare that I can walk into a place and know I can probably kick the ass of every person there. It’s one of the reasons I love this store,” said Dorf, a diabetic who is missing half his left foot. “The way I see it, reading comics isn’t the coolest habit in the world, and maybe I’m kind of a geek, but at least I’m not one of those weirdos in the back playing tabletop games.”

At press time, our reporter left the scene, thankful to return to the newsroom and no longer be the only normal person amongst a group of total weirdos.