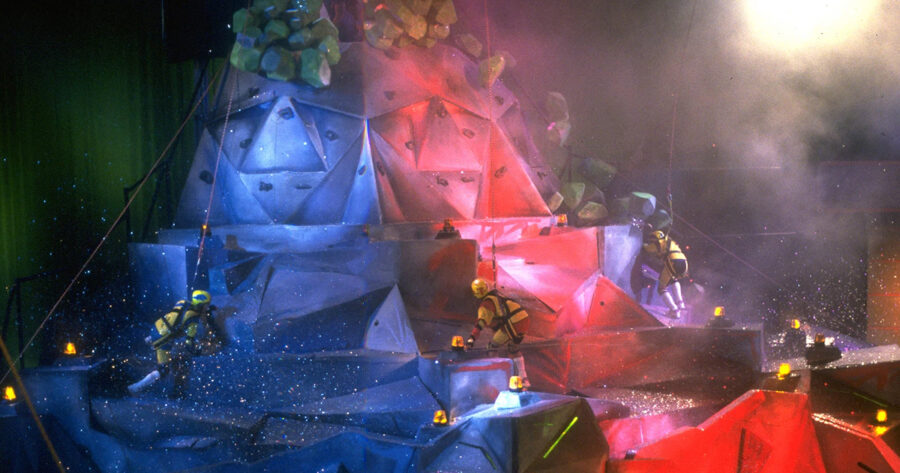 ORLANDO, Fla. — Several recent rallies have drawn attention to the number of deserted bodies reportedly still on the Aggro Crag, the monumental structure contestants of Nickelodeon GUTS were tasked with climbing during the action sports show’s run in the 1990s.

“I spent years imploring those around me to spill their guts, and now it is time I spill mine,” said Mike O’Malley, former GUTS host, at yesterday’s gathering outside of Nickelodeon Studios. “Strobe lights, confetti, giant foam chunks spray painted to look like rocks, these were no conditions for prepubescents, and I’m afraid we left a lot of kids behind. We filmed so many episodes in those first few years, we’d declare a winner, give ‘em a piece of the Crag, and move right on. We must do what is right and recover these bodies so that their family members can properly grieve. And now to Mo to reveal the official b-b-b-body count. Mo!”

At this point O’Malley was joined onstage by his longtime co-host and official GUTS Referee, actress Moira Quirk.

“Mike, we’ve got eight bodies from the Relentless Red team still up there,” she explained, referring to the deceased’s jersey colors worn in their respective episodes. “10 in the Preeminent Purple, and in the lead, with 17 unclaimed corpses, the Blazing Blue!”

After the statistics were revealed, O’Malley announced that several celebrity volunteers would be breaking into Nickelodeon Studios in an attempt to recover some of the abandoned bodies, a group which includes Melissa Joan Hart, Kenan Thompson, and several American Gladiators.

Also present at the rally were several protesters who claimed the bodies on the Aggro Crag were stealing focus from other important causes.

“Of course those kids and their families are important,” said Meredith Roe, speaking to gathered press after O’ Malley’s statements. “But these rallies are stealing attention away from the efforts to locate my son, who we lost inside of a giant butt on Double Dare over 20 years ago!”