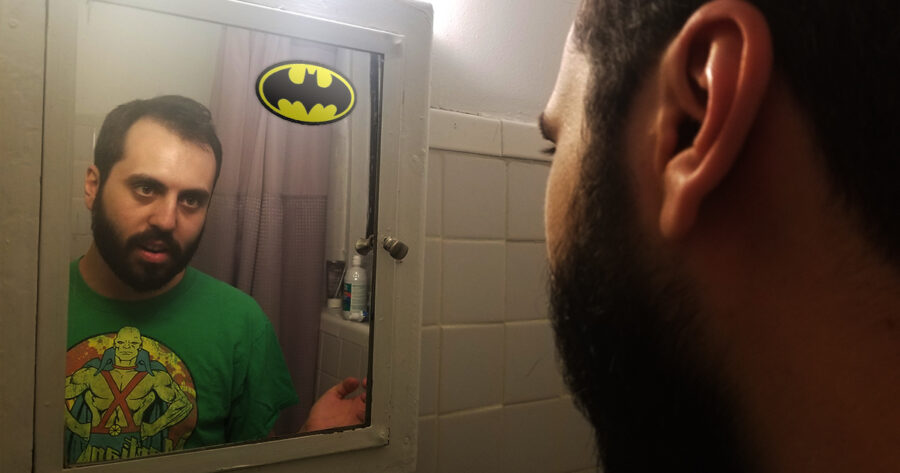 CHARLESTON, S.C. — Several of local DC Extended Universe fan Shane Thorne’s roomates have confirmed that he has been practicing his inevitable defending of the upcoming Aquaman movie in his bedroom late into the night, following the release of the newest trailer at San Diego Comic-Con.

“Atlantis actually really reminds me of an underwater Wakanda,” said a struggling Thorne to his reflection in the bathroom mirror, before shaking his head. “Aquaman is so funny and I love his quips like when he goes onto the airplane and says ‘Permission to come aboard?’ But they’re not too funny like Marvel. They’re just the perfect amount of funny. Shit, this is gonna be a really long night of practice.”

The session lasted nearly four hours, beginning with a monologue on the “more adult tone” and “high production values” of the superhero movie, which will hit theaters this December.

“I assume they’re going to do that thing where it’s always cloudy, which adds a lot of complexity. It lets the movie explore dark themes, because it’s dark outside,” Thorne explained. “A lot of people think DC and Aquaman are lame, but I think they’re cool because I think everybody else is lame, so therefore I take whatever opposite opinion from them I can and defend it until I die.”

To further support his defense of the DCEU film, Thorne drew from a diverse range of topics including the “messy” Marvel Cinematic Universe, the “silly” tone of Marvel’s Thor: Ragnarok, and the “reverse racism” of Marvel’s Black Panther.

“And don’t even get me started on Star Wars: The Last Jedi,” he added.  “Not until the new version comes out.”

Throughout the late-night runthrough, Thorne imagined that his reflection was a typical debate opponent in the form of an anti-DC film reviewer.

“I tried to picture one of those arrogant film school grads that trash DC movies on blogs,” he said, shaking his head in disgust. “The type of person who doesn’t read comic books, has no respect for the franchise, hates the fandom, and collects secret paychecks from a Disney shadow company in return for giving negative reviews to DC films.”

When asked what he would do if Aquaman turned out to be bad, Thorne grew hostile.