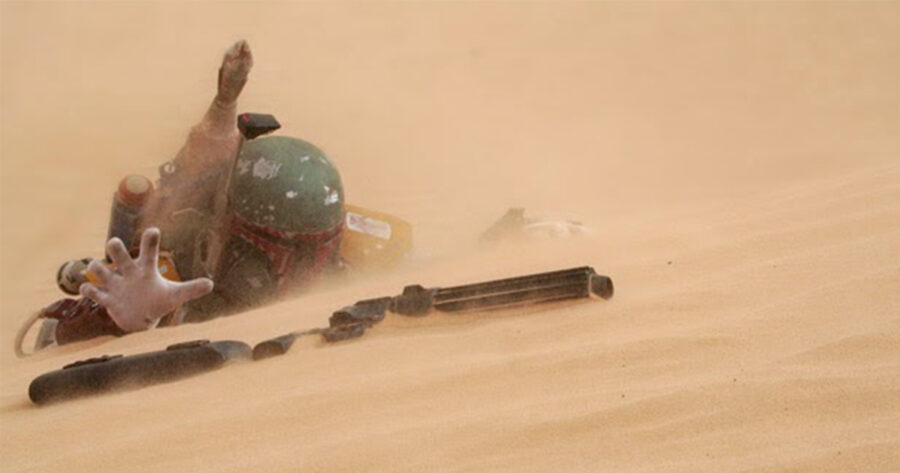 LOS ANGELES — Although Disney has confirmed that the Boba Fett standalone film will be delayed, rumors are circulating that the reasoning is due to the movie being just an hour and a half of the bounty hunter climbing out of the sarlacc pit in real time.

An anonymous source used the term “experimental art piece” to describe Fett’s journey to the surface in one unbroken shot.

“It’s a different kind of Star Wars story,” said the Disney executive. “Like, really different. Instead of diving into the fan favorite’s tragic childhood or badass adventures with Bossk, Disney is focusing on how he got out of the sarlacc after Return of the Jedi. Literally just that. Going up the pit one step at a time without cutting away to anything more interesting.”

While producer Kathleen Kennedy declined to comment on any specific rumor, her office issued a rare statement Monday morning.

“Part of what makes Star Wars great is how fans cook up these wild theories. However, let me be clear: the standalone Boba Fett movie will NOT be a slow-paced character study about the banality of glory or the human perception of time,” Kennedy explained. “It would be crazy to take one of the canon’s most enduring characters and show nothing but the lonely, quiet struggle of survival in a wordless 90-minute long take. We know better than that.”

After the lukewarm performance of Solo, however, watchers aren’t dismissing the rumors as quickly. Julia Page, an analyst with the ShowBiz Group, explained further.

“This could be an effective cost-saving measure for Lucasfilm and Disney,” she said. “Solo was an expensive way to learn how moviegoers react to character spin-offs. By shooting the Fett movie as a one-man arthouse flick and skipping the thrilling action scenes that fans expect, Disney could keep the production budget quite low.”

In addition to the whispers surrounding Fett’s movie, new rumors have been swirling around Episode IX that the final film in the trilogy will just be two and a half hours of a sweaty Kylo Ren walking around his room looking for a shirt.