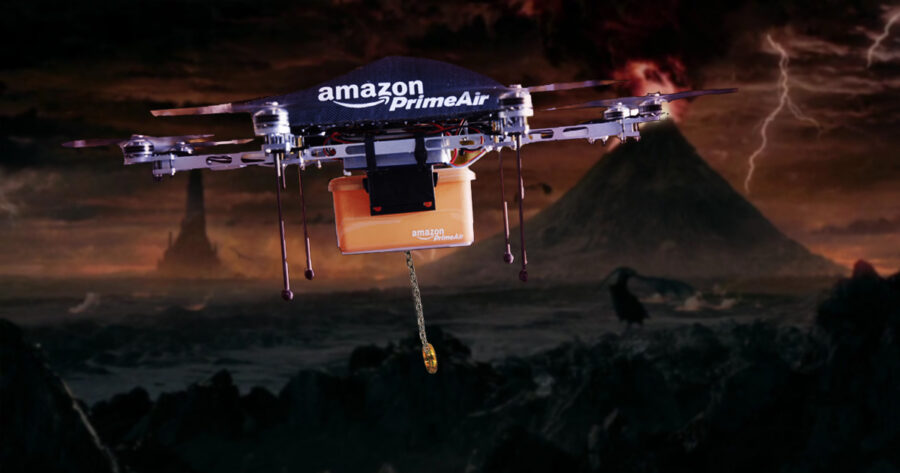 LOS ANGELES — A drone will deliver the One Ring safely and securely to Mordor in Amazon’s upcoming Lord of the Rings series, according to an announcement made today by executives.

“Our drones will be fully capable of handling precious cargo. Precious, precious cargo,” Amazon founder and CEO Jeff Bezos said into a mirror.

“And this plotline will demonstrate that,” replied his reflection, in a lower register.

Since acquiring the rights to the beloved series of J.R.R. Tolkien books last year, rumors about the new series have abounded. The acknowledgement of drones is the first glimpse into the new take on the iconic material, and one of few things known for certain about it.

“Peter Jackson’s Lord of the Ring series was nine hours long. Eleven if you watch the extended edition,” said showrunner Madeline Szerik. “We’re going to cut that down to around an hour. Gandalf will put the ring in an envelope and place it on the drone and that’ll be that. The rest of the series will depict daily festival parties at The Shire. People are going to love it.”

“The original series is about good vs. evil. We’ve updated that and made a wonderful series that is mostly about Gandalf taking advantage of his Amazon Prime two-day shipping.”

Some fans have responded to Szerik’s announcement by wondering if creatures such as Nazgul riding fell-beasts could potentially interfere with the drone delivery.

“Absolutely not, Amazon’s delivery services are extremely reliable, especially for Prime members,” said Bezos. “Drones are going to be a very important technology in Middle Earth. Sausage and tiny hat deliveries to the Shire are going to be integral. They’re going to need them for all those parties.”

Aside from their plans to split the books over nine seasons (with possible spin offs), no other announcements about the series have been made. Amazon, however has promised that the show will be realistic as possible, noting that the hobbits who manufacture Middle Earth’s drones will be overworked and underpaid.