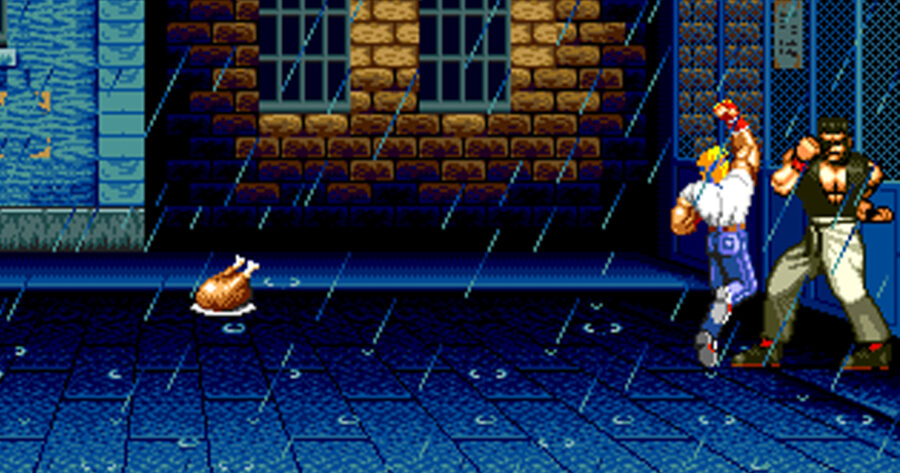 NEW YORK —  Local street fighter Brock Fistman reportedly received the opposite effect as intended after eating a turkey leg he discovered in the trash can in the middle of a street fight.

“That guy was really holding his own until he started eating garbage he found,” said eyewitness Casey Brooker, who said that Fistman succumbed to the group of street thugs shortly after the ingestion. “I’m no expert, and I don’t want to talk shit, but you probably shouldn’t eat an entire turkey leg in the middle of a fight. Especially as quickly as that guy did it. Frankly, he probably would’ve gotten sick even without the gut punches.”

Fistman had recently been walking from left to right in the alleyways of New York City, fighting gangs of street toughs while searching for his recently kidnapped girlfriend Trixie Hart. He was running low on health, taking on his fifth consecutive wave of street hooligans, when he kicked a trash can and found the turkey leg.

“I was like, ‘What? Score!” said a bloody Fistman, laying in a puddle in an alley. “Thought the boost it gave me would be enough to turn the tides of the fight. I mean, it looked good. Completely cooked, no bite marks. But I don’t know, I guess someone threw it away for a reason.”

Several of the street toughs have been spotted remaining in the vicinity, standing idly with their fists and weapons in the air.

“I honestly don’t want to get anywhere near the guy,” said Bruiser, member of the 59th Street Gang. “He’s really going to have a rough time when our leader Maximilian Pain comes in with his mech suit. Maybe he can puke on the giant glowing weak spot in the back!”

At press time, Brock Fistman was at home recovering from food poisoning while his girlfriend was still being held over the shoulder of the evil Ragnork Von MetalFace, who continues to wait by the door of his office for Fistman’s arrival.