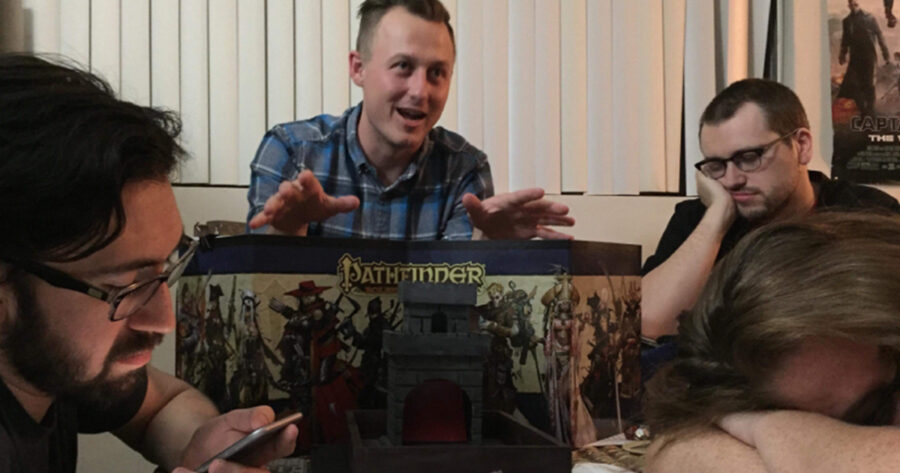 TAMPA, Fla. — Despite meeting regularly for nearly three years, not one member of a local Dungeons and Dragons group considers their Dungeon Master, Cristian Pimento, 29, a close enough friend to ask why he’s having a nervous breakdown in the middle of their monthly session.

“I keep expecting someone to speak up,” said Ava Baxter, who plays a level 4 tiefling ranger. “I may have Chris’s number saved in my phone as ‘coworker’s friend’s cousin’s D&D guy,’ but even I can tell that NPC dialogue like this is a red flag. He just ended an encounter by having the goblin mercenaries realize that ‘nothing really matters’ and decide they might as well stop fighting and lay down on the ground until nature takes them. We didn’t even get any experience points for that!”

Despite the close bonds that their Player Characters share, Pimento’s actual players are united only by their shared interest in tabletop gaming and compatible schedules. Ryan Mendozda, who plays a level 5 gnome cleric and met Pimento at a free introductory improv comedy class offered by the local recreation center, reportedly does not even know if Pimento is employed.

“I don’t know anything about what this guy does when he’s not playing D&D and I like it that way,” explained Mendozda. “When we took a break so he could answer his phone, it sounded like he might be talking to a military recruitment agent? That or a Scientologist. I think this guy’s in a bad place. Earlier he slipped up and accidentally called the overpowered necromancer we were fighting ‘dad.’ Then he described us killing him way too graphically. The thing is, I don’t even want to know. I just want to play D&D.”

Those somewhat close but not that close to Pimento have confirmed the Dungeons and Dragons group’s suspicions.

“Yeah, Chris has been going through a rough time lately,” said Zachary Little, Pimento’s roommate of nearly 6 years. “I mean, I don’t really know the specifics, we met on Craigslist and all we really talk about is movies and overdue rent. But it’s good that his friends are finally here! They always sound like they’re having so much fun when they come over. I can already hear Chris crying with joy. I’m glad that dude has a support system he can rely on, otherwise I’d be really worried.”

At press time, the group had a discussion about kicking Pimento out of their monthly sessions, but ultimately decided against it after no one volunteered to take over as Dungeon Master.