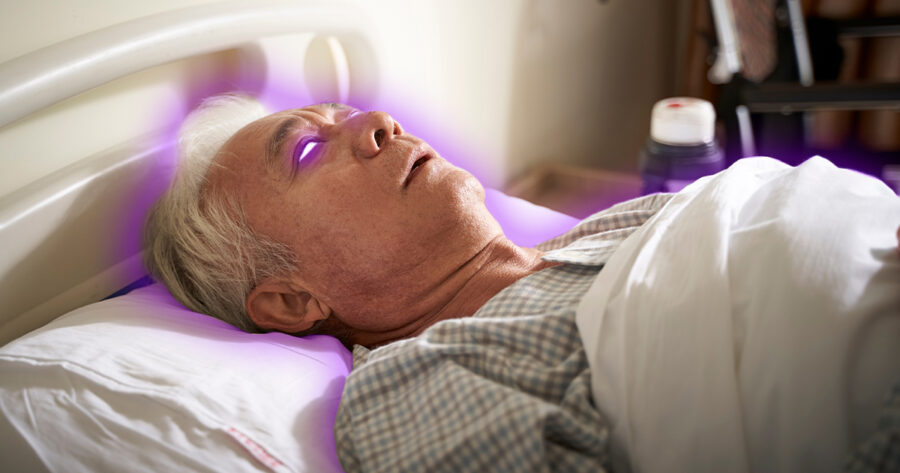 “We had all finished our tearful goodbyes,” said daughter Susanna Elway-Honeycutt. “His health has been deteriorating a long time, so we were ready when the heart monitor went flat. That’s when the lights dimmed and the Gregorian chants began to play out of nowhere.”

A Korean war veteran and retired carpenter, the senior Elway had been in and out of the hospital for years before moving to palliative care following multiple organ failures. For his children and grandchildren, the new health bar came as a big surprise.

Said Elway-Honeycutt, “I knew a [second stage] always came at the worst possible time, but we didn’t expect it from dad. We were depending on the inheritance to pay our kids’ college tuition. We never got power of attorney.”

“Now we’re worried he’s going to spend all his money all on a big glowing sword,” added the shocked mother of three.

The sudden revelation of a second health bar and stronger, deadlier powers in Harvey Elway left medical staff scrambling. “We are working hard on a full panel to determine what kinds of damage he might be weak to at this moment,” said physician Dr. Kathleen Gladwell.  “Lightning, fire, melee strikes, poison: these are all on the table. In terms of prognosis, this may not even be his final form.”

These kinds of events are a rarity in local hospitals, but they do happen. Elway’s awakening brings back echoes of 1992 when Henderson Memorial had a whole other guy show up to take the place of a dying cancer patient just as she was about to pass on.

At press time, the fiery, apocalyptic grandfather said he was “glad to be able to spend more time with his grandchildren” and that “all must fear the power within him.” Henderson Memorial visiting hours have been shortened to their Holiday Schedule until further notice.