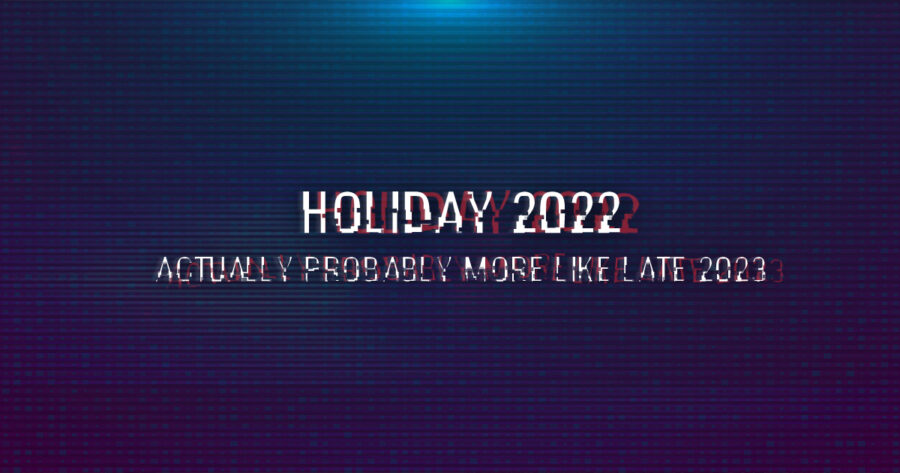 SAN FRANCISCO — An upcoming blockbuster game’s release date was pushed back by the end of the premiere trailer, confused sources have confirmed.

“Wow, never seen it happen quite that fast,” said Carrie McAlpine, shortly after watching the trailer for Cosmic Armada, the highly anticipated new game from R3volutionary Studios. “Around the halfway point of the trailer it said ‘Holiday 2022’ and then by the end ‘Holiday 2022’ was crossed out and it said ‘Late 2023.’ Did they delay the game halfway through making that trailer? When will video game companies realize how long it actually takes to make a video game?”

The makers of Cosmic Armada said that while they apologize for the delay, they are certain it will be the last of its kind.

“Not the start we wanted to get off too, you have to understand that,” said Rod Barboza, the co-founder of R3volutionary Studios. “When we started working on this trailer we really thought we’d have the game ready to ship by this holiday season. As we got to the second half of the trailer, however, and started to debate whether or not we should include gameplay footage, it became clear to us that we were just not going to make our holiday release date. We liked what we had of the trailer so far, so we just changed the title card at the end. No big whoop. Gonna be an extra year.”

“I swear to god on this new release date though,” he added. “Honest.”

While the delay is far from unprecedented, many gamers were troubled about the abrupt nature of its announcement.

“So one minute it’s this year, then one minute next year, huh?” said Adam Hermann, who’s been following the game’s development closely. “That’s great. Did they finally grasp the time and effort it takes to make a good game instead of a merely adequate one, or are they doing the unthinkable and subjecting their workforce to a more tolerable level of overtime and crunch than before? My gut is telling me that it is somehow neither, and that they’ve really just grossly mismanaged this thing at every opportunity so far.”

As of press time, Cosmic Armada’s release date has now been pushed back to Early 2025 and will reportedly be Free to Play.