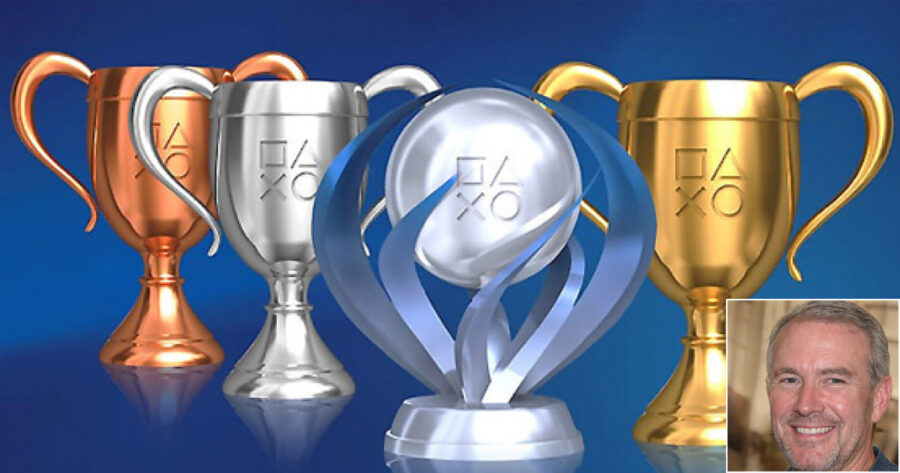 “Oh my god, it was so embarrassing. Before she even had her coat off he took her into the living room to show her my All Will Fall and Primordial trophies from God of War,” Brad Phelps said. “He engraves these for every one I get in a game. No one should be proud of their son’s ‘Rope-A-Dope-A-Dope’ achievement from Arkham Asylum on PS3, that you get just for dropping a tied up henchman on another one. I’m not a little kid anymore!”

The elder Phelps, however, doesn’t see anything wrong with showing off his son’s talents.

“What? A dad can’t be proud of his son?” Byron questioned while adding a newly received ‘The Warrior Monk,’ trophy from Ghost of Tsushima to the cabinet. “I guess he wants me to be one of those mean dads that tells him to stop playing those damn video games. I know I am biased because I’m his dad, but he might go pro one day and ESPN will do a 30 For 30 on him and I’ll be there saying I knew from day one that he was special.”

Bradley’s girlfriend, Gina Garner, was slightly taken aback at the altar to her boyfriend.

“It was neat, but it was hard to act impressed as his dad read off all three hundred and eighty two awards,” she said following an awkward dinner with the Phelps family. “I mean is it really that big of a deal that he placed ten stickers on a pod in LittleBigWorld? I don’t even know what any of that means. Honestly, it was just more of a wakeup call to see how much he played video games.”

As of press time, Byron Phelps has already ordered thirty-five new trophies in anticipation of his son crushing Cyberpunk 2077.