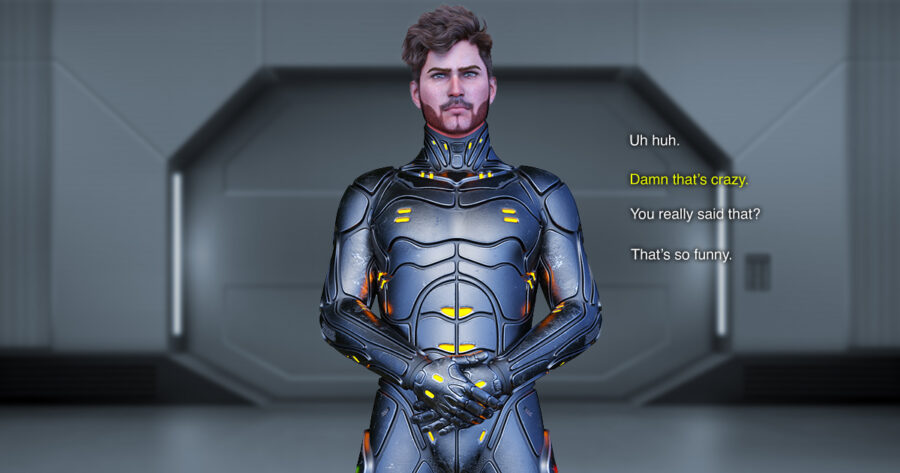 “This has been a long-requested feature. We know gamers want a simpler way to ignore vast amounts of boring in-game dialogue as quickly as possible,” said Lenny Perkins, project director at Canadian developer Soundwave Studios. “Thinking about how your character would respond is a lot of work! This takes the guessing, and effort, out of that process.”

“When we first released the games, we assumed players would be interested in all the backstory and lore our characters were telling them. Clearly, we were wrong. Now, we understand the value of having one permanent button to encourage players to pay as little attention as possible,” said lead writer Linda Crespo. “Our fans are vocal and we want them to know we’re listening. This is our way of saying ‘Damn, that’s crazy’ back to the community.”

Within the Gravity Warp fandom, gamers have expressed overwhelming excitement regarding the change with many seeing this as a huge step in the right direction.

“It’s nice to see developers finally listen to us fans. I can’t wait to say ‘Damn, that’s crazy’ to all my favorite characters like I would with my real-life friends,” said Lucas Gerth, a self-proclaimed superfan who has long demanded this feature. “I hope we continue getting more content like this with options like ‘yeah for sure,’ ‘wow,’ and ‘that’s so funny’ coming out in the near future.”

The development team behind Gravity Warp also announced a remastered collection of the entire series, with confirmation that the new dialogue wheel will be mandatory.