Frustrated Teletubby Forced to Sit Through Ad on His Own Tummy 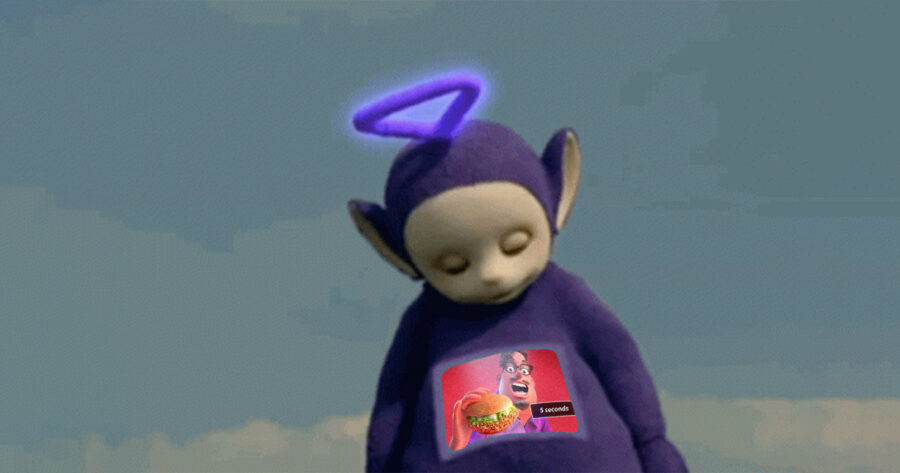 Facebook0Twitter0Reddit0
X
BY Will Carnevale ON July 17, 2022

TELETUBBYLAND — An idyllic Monday took a sharp turn for Tinky Winky today when he was surprised with an advertisement before his afternoon Tummy Tale.

“I was just trying to watch a life-affirming video of human kids learning and having fun, and all of a sudden there’s a Jägermeister ad with Post Malone,” Tinky Winky said through an interpreter. “On my own tummy, and I couldn’t skip it! Even if I had the money for booze, I’m not old enough to partake. At least show me something relevant, like Poshmark, although sometimes it creeps me out how well the TV inside my tummy knows all my purchases and interests.”

The first-of-its-kind commercial inaugurated a new arrangement with Teletubbyland’s local broadcasting system, in which all content streamed on devices or digestive systems paired with Teletubby antennae will now be monetized with unskippable ads no more than 10 minutes long each.

“Of course I put ads on their screens,” said Baby Sun, solar deity and queen regent of Teletubbyland, through a cloud of cigar smoke. “These fuckers don’t pay rent, they don’t pay taxes, and they get all the custard and toast they want; they’re lucky I don’t shoot a whole reality show around them without their knowledge and sell merch. Goo goo ga ga, bitch.”

Partners in the program include Marvel Studios, Grubhub, Expedia, Taco Bell, the Freedom From Religion Foundation, and most prominently, the alcohol brand Jägermeister.

“We were unaware that the average age of Teletubbyland citizens was well below the country’s drinking age of 200 when we signed the promotional agreement,” said James Harriet, cyborg marketing liaison for Mast-Jägermeister SE. “But despite her appearance, Baby Sun is actually thousands of years old, so we still have a market there, and we will continue to advertise within the borders of her nation for as long as she permits. Just drink responsibly, your highness.”

Screens may not be the only newly monetized medium in Teletubbyland, as Tinky Winky has also claimed to have heard ads for MeUndies coming from at least one Voice Trumpet.