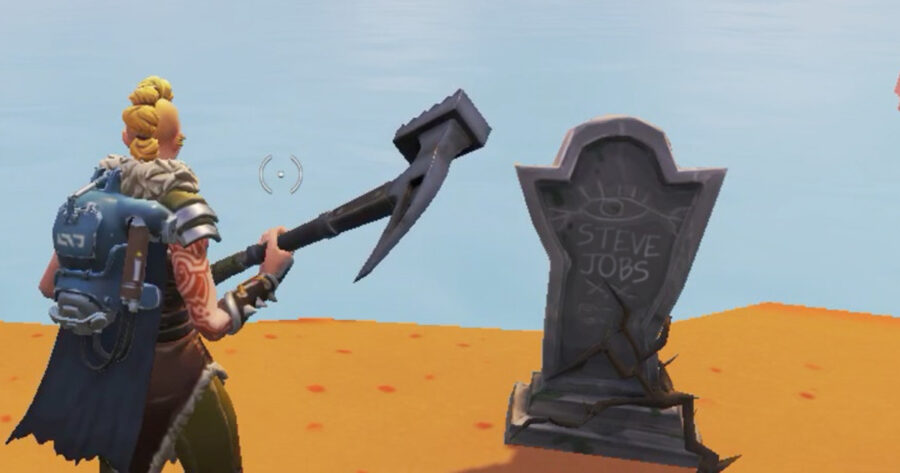 CARY, N.C. — The map for Fortnite’s upcoming 4th season has been revealed, and it features wacky new locations such as Twisted Tunnel, Rainbow Park, and Steve Jobs’ Grave.

“We’re so excited for Fortnite fans to find all the easter eggs we packed into this new map,” said Epic Games CEO Tim Sweeney in a press release. “For example, if you use the new Piss emote while standing on top of Steve Jobs’ gravesite, you’ll pry some free V-Bucks straight from his cold, dead hands. It’s not like he can spend them in Hell, anyways!”

The pointed update comes in the middle of Epic Games’ heated legal dispute with Apple. In addition to the headstone, players can unlock the Black Turtleneck skin by dying 100 times throughout the season.

“This is immature, even by Epic’s standards,” vented Apple general counsel Katherine Adams. “We took them to court for unauthorized use of Mr. Jobs’ likeness, but Epic’s lawyers only submitted an incomplete version of the map as evidence, which sliced the location out entirely. They told the judge that the missing piece was Epic’s standard 30% cut of the evidence and that it was unreasonable for us to ask for the whole thing.”

Epic is hyping the upcoming season with a mysterious new ARG. Players reported that they’ve received a set of coordinates with instructions to show up at various locations with a black ski mask and bag of bricks. So far, all the coordinates correspond to Apple Stores around the world.

“I don’t really get what’s going on, but I want to play Fortnite on my phone again,” said 11-year-old Hugo Couture, while vandalizing the 57th Street Apple Store in New York City with a pickaxe. “I think Epic is going to pull out a 200 IQ case against Apple in court and sauce all over this Steve Jobs guy, whoever he is. Let’s effing go!”

Epic says it’s committed to lampooning Apple’s authoritarian practices with Fortnite’s new season, and assured fans that the games developers are working 70-hours a week to deliver on that promise.