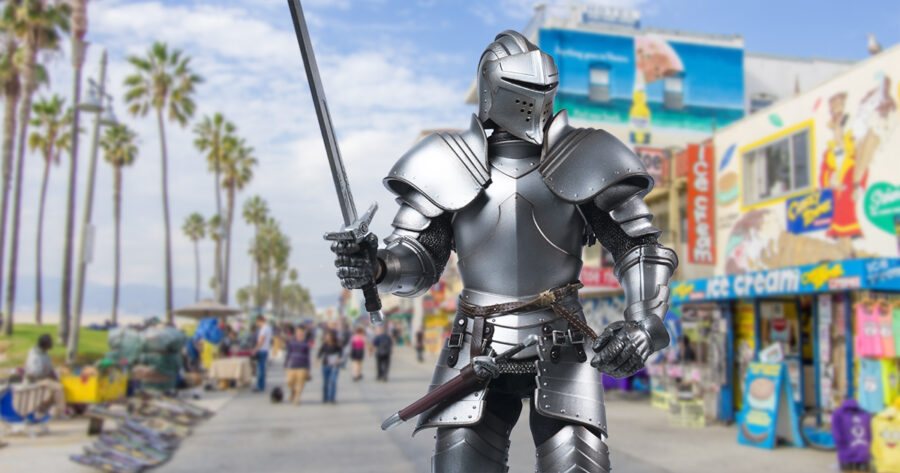 LOS ANGELES — Champion of all things woke, fabled social justice warrior Ser Jonas Talbot is reportedly wandering the coastal bubble of the United States in search of a traveler brave enough to cancel him.

“Who is’t dares visage me in woke combat? I has’t seek’d out the wokest of knights on Twitt’r and TikTok and yet has’t hath found a m’re smatt’ring of daws, and I defeat’d those folx all apace with quick cancelations,” Talbot said. “F’r me, wokeness is but a game! With mine own trusty steed, mine podcast, I shall finally findeth someone who is’t is a w’rthy matcheth: someone who is’t can searcheth through mine own tweets as well as I can searcheth theirs.  And yond shall beest the hurlyburly of a lifetime, for I yearn only f’r an hon’rable cancelation.”

“Huzzah! How gl’rious shall’t beest to finally meeteth social death in the battlefield of woke,” Talbot continued. “Once defeat’d by the handeth of a social justice warri’r more wondrous’r than I, then I can finally retireth and liveth out mine own days as a m’re racist. To battle, I wend!”

Talbot’s enthusiasm, however, has been met with criticism from his peers in the political realm.

“Yeah that guy showed up to our DSA meeting on a fucking horse,” said local activist Anushka Dhar. “I should have known right then and there. I don’t generally trust people who own horses, period. But I let him come to one of our meetings about a campaign we were working on and he kept just asking about when we could do battle. He seemed to have absolutely no political ideology except that he kept asking if we could listen to more women. I was like, dude, I’m a woman. He’s probably just some CIA guy or whatever. He did phonebank a bit, though, so who cares in the end?”

“Pewey! How dareth Ser Talbot cometh to mine own realm and tryeth to claimeth to beest champion of it?” said another local activist and social justice warrior Ser Jakub Rowley. “I am the keepeth’r of these people and if ‘t be true that Talbot claims to has’t hath found nay warri’rs h’re, I sayeth valorous riddance to that gent! I shall meeteth him on Twitt’r and searcheth his tweets f’r the w’rd ‘black’ and the w’rd ‘jew’ and the w’rd ‘chinese’ and I shall seeth once and f’r all who is’t is the greatest social justice warri’r in this realm.”

At press time, a warm smile and a tear appeared on Talbot’s face when he saw his own name trending online for sexting a 15 year old girl. “So ‘t appears I has’t hath met mine final fate,” he tweeted from his account before locking it and eventually deleting it entirely.