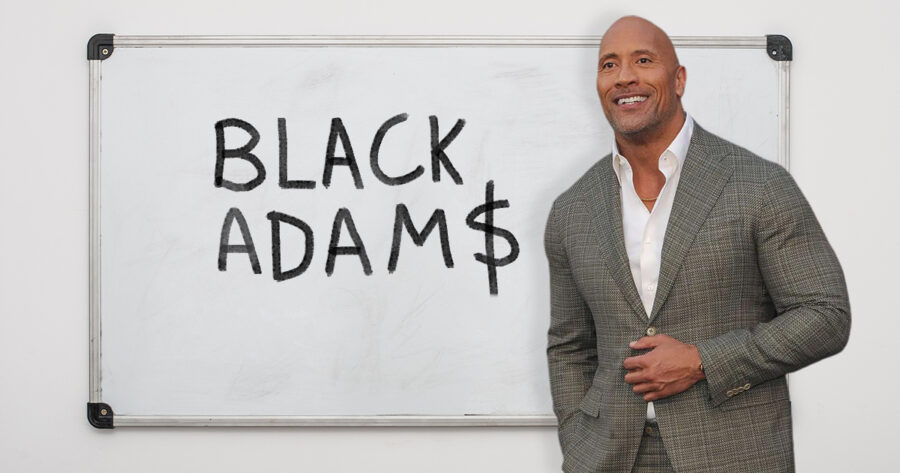 LOS ANGELES — Following the success of Black Adam, star Dwayne “The Rock” Johnson recently gathered DC executives to pitch a sequel, which merely consisted of him adding an “S” to the end of the film’s title, and then altering it further to make it a dollar sign, sources have confirmed.

“Brilliant, we have to make this film,” said one enthusiastic DC employee. “And before you tell me, yes, I know he’s just ripping the pitch off wholesale from the urban legend around James Cameron pitching Aliens the exact same way. I don’t care, it’s an even better idea now, because now some of that dollar sign money will become my money!”

Others in the room were less inspired by Johnson’s wordless pitch, which consisted of him writing “Black Adam$” on a whiteboard and pointing at it and smiling for 15 minutes.

“When Cameron pitched Aliens, there was a sensible plot there,” said Peter Safran, DC Studios’ newly announced co-CEO. “We go to a planet that the aliens have colonized and deal with a bunch more of them. What does he want us to do, have a planet full of Black Adams running around? Is that what Dwayne wants?”

“Actually that’s not half bad,” Safran added after a pause.

Fans of the original film were optimistic about the possibilities a sequel with multiple Black Adams presented.

“I mean, it sense in a way. He’s sort of this hero and villain all wrapped up into one,” said Brandon Becker, a local moviegoer that enjoyed the first film. “Why couldn’t he fight some version of himself in the sequel? Oh man, that’s what we’re working up to, isn’t it? It’s gonna be like the climactic battle of Endgame only it will just be an army of Dwayne Johnson’s. Sounds pretty tight, honestly.”

DC Studios has confirmed that Black Adams will begin filming early next year, with a script expected to be completed at some point during production.