Drunken Night Out Turns Into Side-Scrolling Beat ‘Em Up 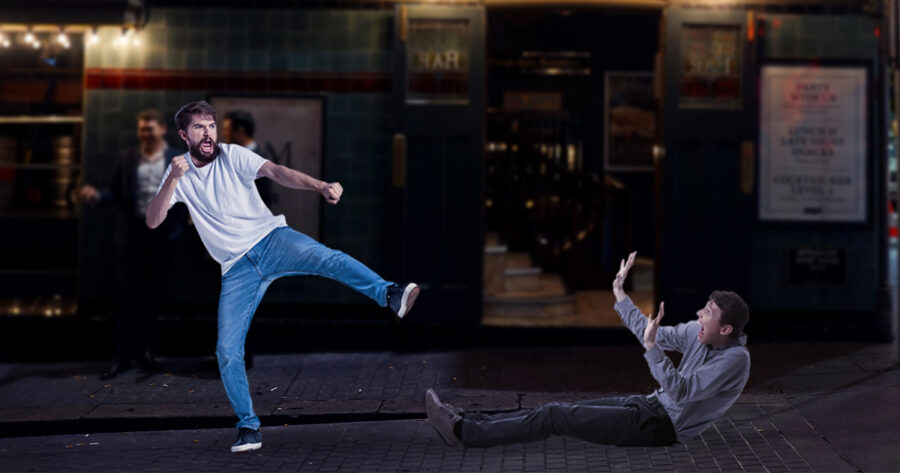 NEW ORLEANS — Local police were called in response to a group of drunken revelers this weekend who quickly found their night on the town turning into a side-scrolling beat-em up, witnesses who observed the events confirmed.

“We definitely see this now and then,” said responding officer Mitch Taylor, while standing over several knocked-out revelers with spinning stars around their heads. “People come from out of state to enjoy some classic New Orleans hospitality, and before you know it they’re moving two directionally down Bourbon Street and awkwardly side-stepping horizontally to get out of the way of passersby. Sometimes they just want to look for coins or rings and jump around a bit, but last night these guys were out for violence. When that happens we need to step in and say ‘game over.’”

After drinking at half a dozen bars, the group of three drunks reportedly made their way down the street kicking phone booths, eating chicken out of the trash, and awkwardly alternating between punches and flying kicks aimed at no one in particular.

“I’m pretty sure I tried to do a leg sweep on someone,” said Ken Hagerty, one of the drunks, from behind the bars of the NOPD drunk tank. “I had far too much to drink, and the next minute I was walking up to people and demanding bonuses for punching stop signs. I really hope no one was too badly hurt. Oh god, did I uppercut an old man? I think I did. I kept telling him he was the ‘final boss’ and asking him where I could find the Mad Gear Gang. What the fuck am I doing with my life?”

Sources say this isn’t the first time New Orleans tourists have found themselves in trouble for drunkenness, with group outings to the city regularly turning into pastiches of RPGs, first-person shooters, and even survival horror.

“This kind of game-inspired street violence is what we need to focus on cracking down on,” declared New Orleans mayor LaToya Cantrell. “Drunkenness should be passing out in your puke on the street, not doing kick-kick-punch combos on tourists. That’s why my reelection campaign will focus on a return to good old-fashioned New Orleans pastimes like streaking, inappropriate groping, and drunk driving.”

At press time, the impounded revelers have reportedly posted bail and been released just in time to attend a bachelor party racing jet skis and helicopters in Miami.