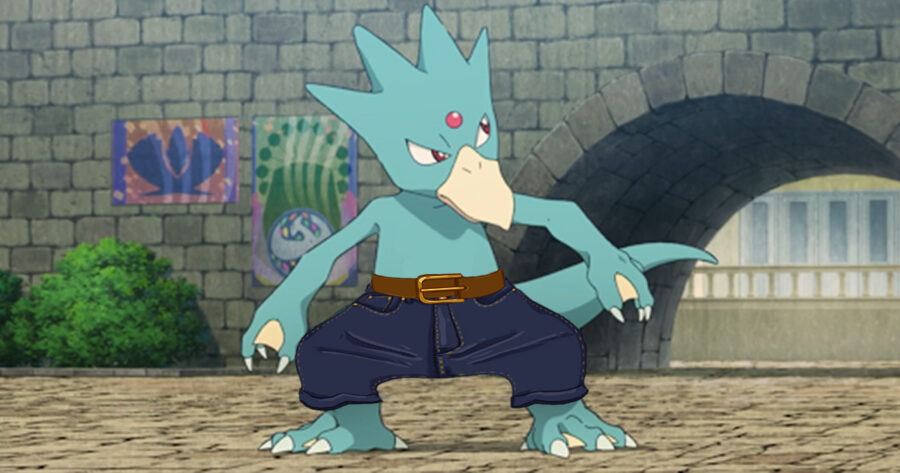 “When the Sword & Shield layoffs were going on, that’s when we all started to get a little worried,” said Golduck from his studio apartment, as he prepared for a shift in the digital world. “Meowth had to pick up a Galarian form as a third gig, for Christ’s sake. The guy is on TV and just barely getting by. That alone says enough.”

While Golduck was grateful for the gig as a digital monster, he complained that he didn’t exactly feel like a champion.

“The money’s good, but these guys are weird, man. Goin’ around speaking in full sentences like they’re such hot shit. Whatever happened to just saying your own name? Short and to the point, no beatin’ around the bush,” the blue skinned, blue collar worker griped as he fastened his skull-adorned jorts. “And can you believe these uniforms? The jorts are pretty tame but some of these motherfuckers are head to toe in leather. We’re around kids all day. It ain’t right, it’s sick.”

The Water-type icon hopes to return to his flagship franchise soon, but remains unsure of the future.

“For a while I was waiting on a Pokémon Snap callback, but it’s pretty clear now that ain’t fuckin’ happening,” Golduck muttered as he strapped on numerous gothic belts. “Hey, this is all anonymous, right? The monkey suit helps me blend in, but I wanna keep it hush hush. I’m something of a celebrity back home. I’d hate for anyone to find out I’m double dipping.”

When reached for comment, Bandai’s PR representative took no issue with the news.

“That guy’s a Pokémon? Oh. Cool, I guess? It’s whatever. We hired one of those guys that pop outta the Beyblades last week. It’s the economy of collectable monsters. Same shit, different pile.”