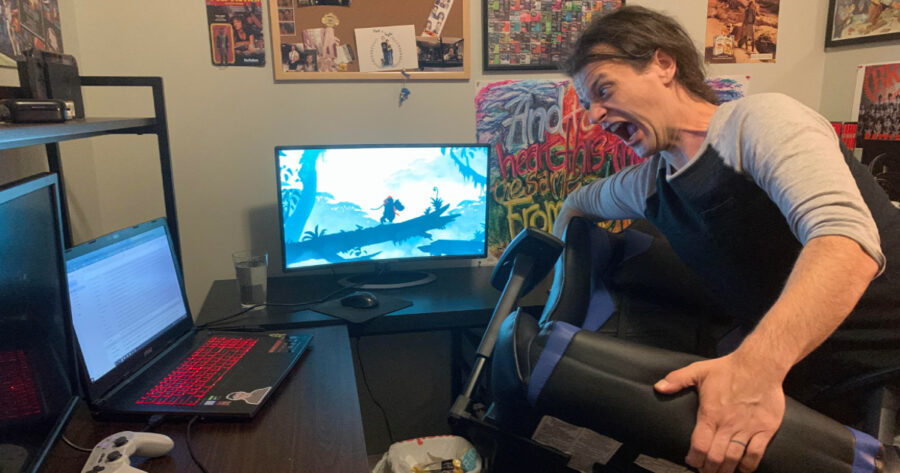 PONTIAC, Mich. — A YouTube compilation of video game music titled ‘Donkey Kong Country Music to Help You Chill Out’ has reportedly had the opposite effect on a local man, concerned sources have confirmed.

“Oh my goodness, he just got so fired up,” said Louise Pendleton, husband of Ross Pendleton, who found himself unable to chill out or relax while listening to the compilation of Donkey Kong tunes. “He said he was gonna try to get some work done so he went into his office and put on some music. A few minutes later I started to hear all kinds of screaming and crashing, and then I heard glass shatter! I poked my head in there to see what was going on, and I guess he was just really feeling that Nintendo music. He threw his office chair out the window for some reason. That stuff gets him so worked up, I wish he’d stop putting it on.”

After pleading with Ross to chill just a little bit, he briefly obliged, pausing the playlist long enough to get some water and address the immediate aftermath of the window incident.

“Fuck man, that shit really gets me going,” said Pendleton, applying bandages to several cuts on his hands. “That playlist man, it just took me over. It started with ‘Aquatic Ambience,’ and I was just sitting there vibing, answering emails and stuff like that, no problem at all. Next thing I know a faster song came on and some drums started up and I was up and moving before I even knew what was happening. Fuckin’ music gets me going, dude. I wonder if I should go to the hospital. Damn, I gotta get that window fixed, too.”

Pendleton’s parents stated that this was merely the latest in a long string of incidents related to songs from Donkey Kong Country games that weren’t very chill.

“Oh no, not that Donkey Kong shit again,” said Ruth Pendleton, Ross’ mother. “I remember one year we got him one of those games for Christmas thinking it looked a lot more wholesome than Mortal Kombat or anything else he’d asked for. He was up in his room playing it when after a while, I heard an awful commotion. I went upstairs, and you’ll think I’m making this up, but my son’s legs were sticking out of the drywall. He’d got a running start and jumped headfirst into the wall. I wasn’t sure how or why it happened, but yeah, eventually we figured out it was the game that did it. You can’t let my son hear that Donkey Kong music. There’s no telling what might happen.”

As of press time, neighbors spotted Pendleton chilling out in his car as it sat in the driveway, smoking weed and listening to the ‘DK Rap’.