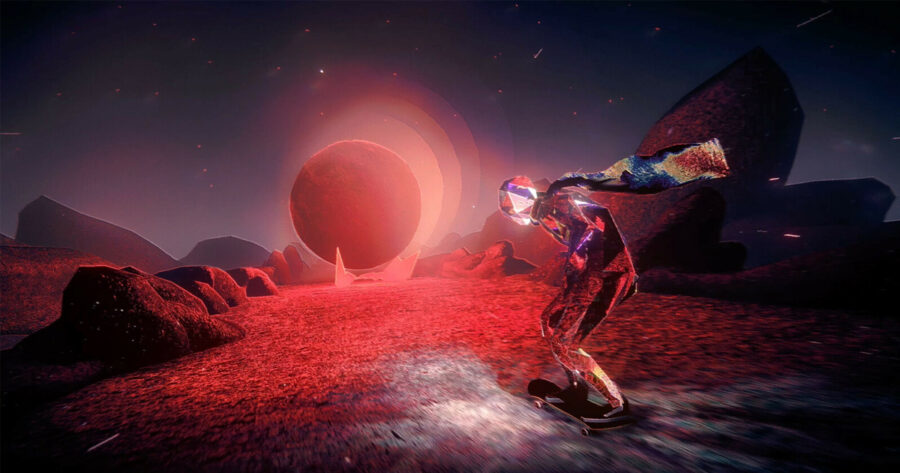 “I decided to really let viewers experience the pain and anguish of the protagonist, I would let them roll around without any brass to be heard,” Skate Story creator Sam Eng said. “Not one toot or honk will echo in this cold, horrible landscape, which we think will drive players to the sort of insanity the game’s theme is trying to convey. It’s a haunting, empty world that doesn’t even have a god damn tuba, so good luck. So here I am, doing everything I can, holding on to what I am, pretending I’m trapped inside the pits of Hell.”

An early playtester for the Skate Story, Michael Cromwell, explained how the game’s lack of ska music slowly takes a toll on the player’s mental state.

“I see now how the lonely, despondent demon I played with feels every day,” Cromwell said. “I truly realized the game took place in Hell the moment I landed a sick kickflip, when the game’s moody soundtrack didn’t suddenly pipe up into playful guitar and raucous trumpet it hit me how empty and meaningless life can be. I thought a skateboarding game trying to be thought-provoking was a tall order, but now I understand the pain of loss. Sometimes it’s about the impressions that you don’t get. 10/10.”

Blood Cultures, the enigmatic musical artist responsible for the game’s soundtrack, commented on his compositional choices for the game.

“It was an incredible challenge to resist the urge to pick it up,” Cultures said. “I had to destroy all my brass instruments just because I kept finding myself blacking out and suddenly regaining consciousness holding them and playing lively trombone solos on the soundtrack. Now there’s no way my body or mind can subconsciously sneak ska into the game like it so desperately wants to. Not even third-wave ska.”

At press time, despite Skate Story’s lack of ska music, Eng revealed that he isn’t against releasing Bam Margera as a DLC character.

Good news, gamers! This article is sponsored by Devolver which means that we didn’t just make all this shit up. Skate Story is a real life video game that you can play when it comes out. Press that wishlist button on Steam because this game looks like it’s More Than The Sum Of Its Jake.