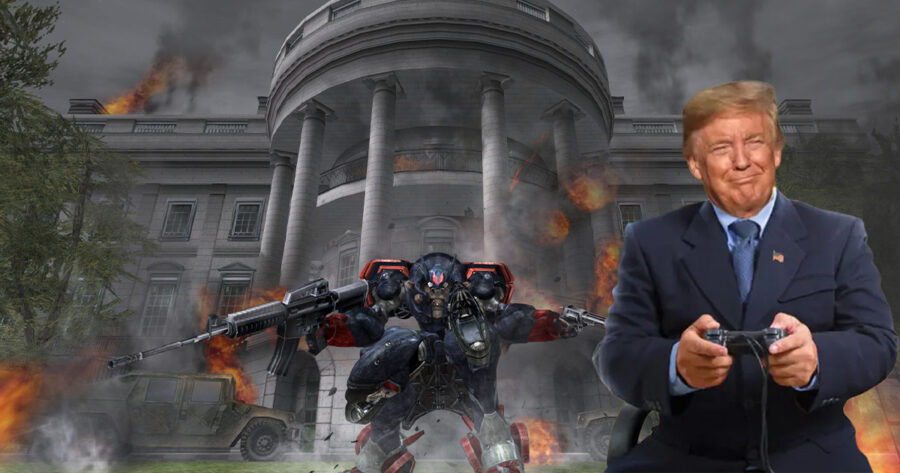 “He seems really into it,” one attorney, asking to remain anonymous. “I’m worried it might be giving him some ideas. Sometimes when he’s shooting down military helicopters from his presidential battle robot, I’ll hear him mutter ‘that’d show ‘em’ or ‘take that Sleepy Joe’ under his breath. I’m sure he’s simply letting off some steam, but just in case, I am having my paralegals look into if there are any legal precedents for mecha-treason.”

According to those close to the situation, the explosive third-person political shooter has become almost an obsession for Trump.

“In hindsight, I really wish I hadn’t recommended it to him,” remarked another attorney. “All he did yesterday was play Metal Wolf Chaos XD for hours while constantly talking about how he’s ‘going for the take back the White House speedrun.’ I asked if he meant in the game, and he just winked at me before turning back to the TV and firing a rocket launcher at the Statue of Liberty. He keeps saying Mexico is going to pay to build the mech. I don’t even know what that means.”

While his legal team prepares for the worst, members of the Trump family have insisted that the game holds no influence on the former president’s actions.

“These concerns about my father are just overblown liberal nonsense,” insisted Donald Trump Jr. “It’s just a game. Yes, we have invested large amounts of money into robotics engineering ever since Dad beat the level where you rampage through the streets of San Francisco, but that’s just because it’s a really booming industry right now! Also, this is totally unrelated, but you might hear some construction noises coming from underneath Trump Tower over the next few months. Don’t worry about it.”

“If you’re from Saudi Arabia, though, and wanna do a test ride of one of the mechs, hit me up,” Trump Jr added. “It’s so sick.”

At press time, Democrats in Congress were reportedly convening to discuss a potential solution to the problem, introducing legislation that would formally condemn the use of taking over the country with the use of mech suits.

Uh oh! Hard Drive has been compromised: this article is sponsored by Devolver Digital. If you wanna keep an eye on what Trump’s plans are, you’re gonna wanna check out Metal Wolf Chaos XD for yourself.