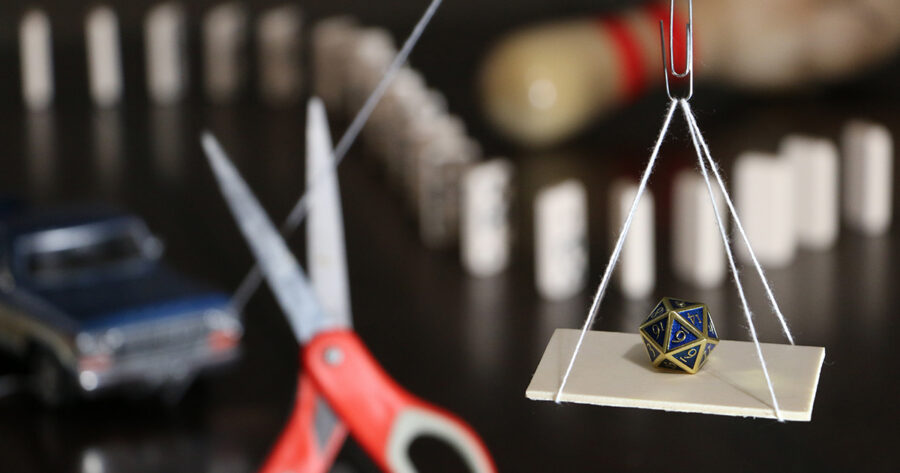 CHICAGO — Dungeons & Dragons player Joanna Bateman claimed her natural 20 should be recognized even though the die went through a Rube Goldberg machine before landing, sources in their campaign say.

“It’s very frustrating to have such a clutch roll thrown out on a technicality,” said Bateman, a level 5 halfling monk. “What difference does it make if the die took 20 minutes to land on a number? Chance still played a major factor in the outcome, if not more of a factor.”

Bateman was performing a deception check on a jail guard when her d20 fell off the table and into a bucket. The bucket then tilted down, depositing the die into a Hot Wheels convertible.

The toy car then slid down a ramp and crashed into a domino, simultaneously catapulting the die forward and knocking down a row of dominoes that ended on one with an attached knife. The domino with the knife cut the wound-up string of a home-made spoon catapult just as the die landed in the spoon, launching the die through the air.

A cuckoo clock chimed to mark the hour as the die soared, and the fake cuckoo bird that shot out of the clock interrupted the die’s flight. The die rolled back onto the table in front of Bateman, showing a natural 20.

“But there was nothing natural about it,” Mark Francis contested. “As the dungeon master, it’s my job to ensure the integrity of the simulated world we’re imagining together. It’s one thing for the die to fall off the table or knock into a beer can. It’s another for it to go through an admittedly fun series of needlessly complex and unrelated devices before landing.”

Sources say Bateman finally agreed to a reroll after Francis made it clear he wouldn’t budge, annoying others in the party.

“Joanna just needed one good deception check to convince this guard that her character was the daughter of the king. The natural 20 was an amazing end to a tense conversation” said party-member Brian Akins. “If you’re going to disqualify rolls that go through your Rube Goldberg machine, maybe you should take it down when you have us over to play.”

At press time, Francis has vehemently refused to dismantle his Rube Goldberg machine for future sessions, insisting that it is a collectible and not a toy to be played with.