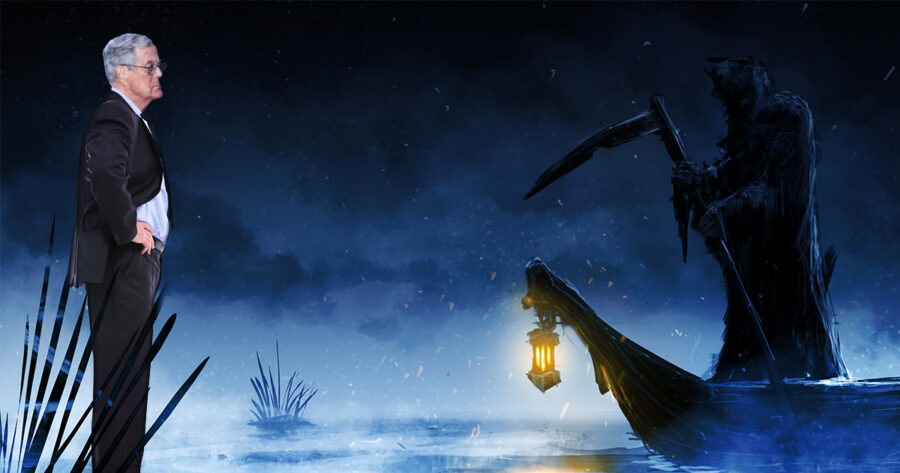 STYX — Recently deceased billionaire and libertarian political donor David H. Koch was reportedly still camped on the edge of the river Styx this morning, unable to reach the afterlife after refusing to pay the required one-cent fee to access the ferry.

“I don’t see why there needs to be a blanket fee for everybody when we could simply allow the market to determine a fair price,” said Koch, shivering over a small fire at the edge of the ancient river that separates the mortal world from the realm in which all human souls rest together in eternity, free from pain and worry. “I see a lot of profit to be made here.”

Koch also voiced his displeasure at the state of the boat itself, a flat wooden ferry pushed along by Charon, the boatman whose sole purpose is to guide humans through the transition.

“This is what you get when you let the government in,” Koch said, pointing at the old boat where Charon waited to reunite Koch’s spirit with those of his beloved friends and family. “Open this market up, you’re going to get some investors down here and turn this whole operation around. I would be happy to pay a million or two for a nice yacht ride.”

Charon reportedly felt there had been a misunderstanding between himself and Koch.

“The coin is more like, you know, a metaphorical thing,” said Charon. “Giving up your worldly possessions so you can move into the afterlife on an equal footing with everyone else. That’s why we make it so cheap. I’m not sure if this guy really gets it.”

Koch brushed off concerns that a free market would raise the price beyond what most could afford.

“If people couldn’t afford a yacht they could swim. I think you could make it across,” he said, peering across the massive river. “Not me, of course. Poor people.”