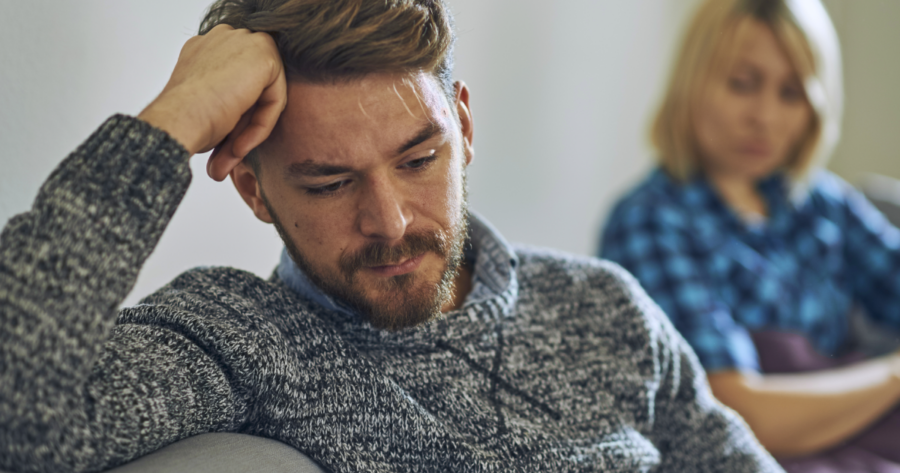 WAXAHACHIE, Texas — Local couple Darryl Perkins and Amanda Stein recently found out they were going to get into a fight after a force field appeared over their apartment door.

“It sucks because we had just got done fighting and were about to head out,” Perkins said after the spat took place. “I figured we’d get at least 30 minutes of down time to explore our relationship or develop our story. Instead it was another fight that felt extremely tedious and unnecessary.”

The couple claimed neither party wanted to fight, but both felt compelled to do so to make the force field go away.

“This weird face always appears over the door. It’s some kind of mystical ghoul or something that conveniently pops up so neither of us can leave the fight. It feels kind of unfair. Why can’t our fights develop organically throughout our night?” Stein asked, sitting with her back turned towards Perkins while he stared blankly at his phone.

“For once, I’d love to have a fight that moves through several spaces instead of being isolated to one space. We could start in the apartment, go to the car, and end it at a restaurant or something,” Stein continued. “Or we could just not fight at all for awhile. There’s other elements to our relationship we can enjoy. Our conversation system is dynamic.”

“We have a pretty decent sex mechanic,” Perkins added.

“The sex feels a little tacked on at the moment,” Stein replied.

Friends of the couple explained that the force field has become a regular occurrence during their six-month relationship.

“The force field has popped up a few times while I’ve been there,” Stein’s friend Taylor Burns reported. “I ask the ghoul face thing if I can pass, and it always just stares back with its mouth agape. I don’t want to have to stand there watching them fight in their cramped apartment. I hope this is something they can address in a later iteration of their relationship.”

At the time of this report, Perkins and Stein had reportedly separated, although there were already rumblings that a sequel was in the works.