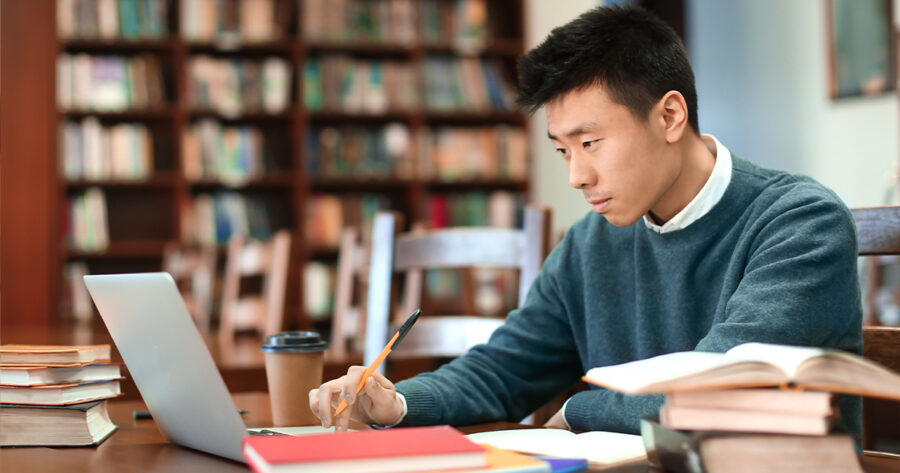 ATHENS, Ga. — A local college freshman has reportedly not yet realized that his high placement in his remote learning class rankings despite his C+ average is the result of the fact that he has spent the entire semester getting matched with AI-controlled classmates.

“Hey, I don’t wanna get sappy, but these weeks of Film Criticism 301 with you guys have been some of the best in my life,” Franklin University student Shane Zhou typed into in an otherwise-empty study group chat last week. “The way you all make grades of 75 to 85 exactly on every single assignment, the way you all congratulate me during seminars with a simultaneous chorus of ‘Nice answer!’ or ‘What a pass!’ every time I raise my hand during lectures… I can’t wait to meet you all one day when you finally turn your cameras on.”

Zhou reportedly continued reminiscing about memorable class experiences, such as a group project he completed with two other classmates named StudiousErnesto018 and AcademicLeanne030 which narrowly received the class’s highest grade in a tense finish.

“I thought our mock debate was going awful, but just as it seemed like we would never keep pace, the other group just… started talking really slowly? And didn’t start going again until we’d caught up?” Zhou recalled, furrowing his brow after walking through the more telltale details of his bot-populated student body. “It was all worth it to hear everyone in class say ‘gg’ in charmingly idiosyncratic typing styles, though.”

Now more than ever, colleges are sneakily pitting students against bot classmates to ease them into the university experience, which might prove too daunting if they were matched with four-year veterans.

“Underleveled students from casual high schools will have a much better time if their first few classes are in a controlled setting like this,” said Heidi Derwald, a senior college admissions advisor at Franklin University. “Feeling like you’re King Shit for the first handful of weeks is important for building attachment, and once you outgrow the bots, you’ll care too much about getting good to be upset about it. That’s the perfect time to introduce tuition hikes, too.”

As of press time, Zhou’s academic advisor was recommending that he purchase the Study Pass to be able to accumulate U-Bucks for unlocking rare classes in the coming semesters.