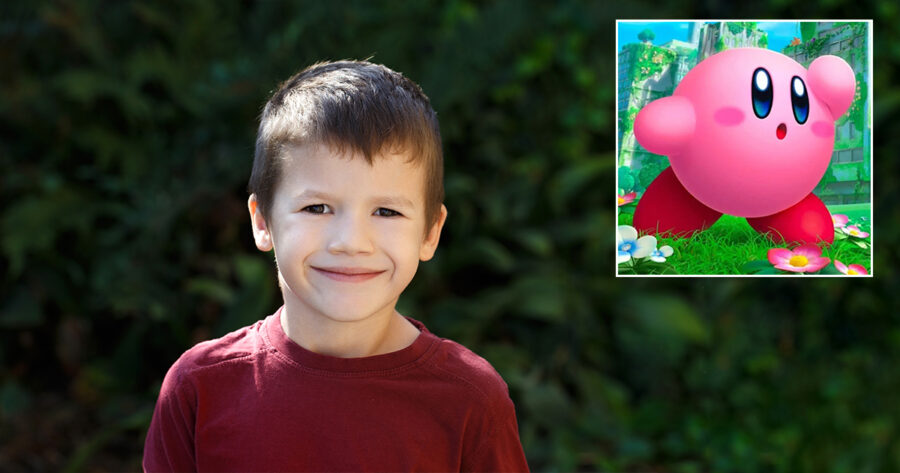 HOWELL, N.J. — 6-year-old Brandon Miller has found himself under intense scrutiny by his peers after claiming his uncle from Washington not only works for Nintendo, but is also the pink, celestial demigod Kirby.

“Brandon is always making things up! For a while we believed his uncle actually worked at Nintendo because he always seemed to know what games were going to be revealed in the Directs, but yesterday at recess he told us with a straight face that his dad’s brother was Kirby. Like, the Kirby. Even if this was one percent true, his dad isn’t Masahiro Sakurai,” said classmate Logan Brown. “I can believe that his uncle works at Nintendo, like maybe he does the art or maybe he has the same job as the cafeteria lady, but not flying around on a star eating people.”

Miller has remained steadfast in his assertion that his uncle is indeed the titular character from the acclaimed Nintendo series.

“My uncle Kirby has been working at Nintendo for a long time and he’s sent me every one of his games. OK so Planet Popstar is made up and he only met Marx once but the rest of it is true. One time at Thanksgiving he ate the whole turkey in one bite, and then he ate all the ice cream, and my grandma was really mad so he ate her too and got her ability to tell my mom that I’m spoiled,” said Brandon, gesturing wildly toward a drawing he made of Kirby inhaling an old woman. “Nobody at school believes me because they’re dumb. If the Ninja Turtles are real, so is Kirby. They’re going to be so jealous when he comes to school and gives me a Switch Pro which he’s totally working on.”

Nintendo of America, being no stranger to the rumor mill, has dedicated an entire division to squashing claims of family members working for the company, and are characters from their games.

“Many of our employees here are the aunt or uncle of someone who can flex on their schoolmates about their connection to Nintendo. But you wouldn’t believe the number of emails and letters we get from fact checking children trying to confirm the existence of our characters. We can assure the kids that Donkey Kong is not someone’s dad’s college roommate. His name is Denny, and he weighs 240 pounds and works in accounting,” said Nintendo of America rep Jack Balmer. “I mean it’s cute, but after the 20th request of the day it just becomes more prudent to just go along with it. According to about 300 kids, I’m actually Luigi.”

After relentless questioning, Miller sheepishly admitted that his story was indeed fabricated, and revealed that his uncle is actually Sackboy and works for Sony.