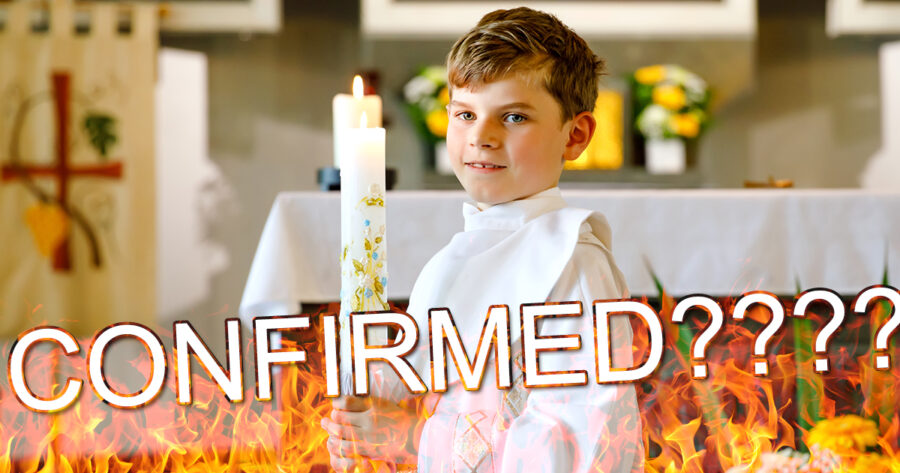 You’re gonna want to sit down for this one! After years of speculation, Hard Drive has acquired footage from a private conference at Reaching Souls Cathedral that corroborates what so many have predicted over the last decade: Catholic kid James Kim has been officially CONFIRMED!

If you’ve been paying any attention, you already know that Kim’s Catholicism was originally teased in 2009 with a baptism ceremony organized by his creators. That ritual also included a reveal of Kim’s sponsor — his aunt Kathleen — though she’s already been officially CONFIRMED since the early 1990s.

Kim’s baptism, of course, came at an extremely early stage in his development — and we’ve learned a whole lot more info since then!

For one thing, although we’ve taken to calling him by the codename “James Kim” for so long, the ceremony revealed that Kim’s official new name is “Ignatius.” That’s gonna take some getting used to! In fact, one attendee of the spiritual launch event, Kim’s friend Sarah Chang, insists that she’ll keep calling him James Kim because, as far as she’s concerned, “that’s still his actual name.” We’ll see if other fans in the growing James Kim community follow suit!

If there was any doubt that this keynote was going to include some major bombshells about Kim’s ongoing covenant with God, it all disappeared the moment that living legend Bishop William Berrigan IV strutted onto the chancel.

“As we enter Q1, be sealed with the gift of the Holy Spirit,” Berrigan told Kim, officially CONFIRMING his CONFIRMATION. “Peace be with you in Q2 and beyond.”

Up until now, sources close to Kim have largely withheld details about his CONFIRMATION when approached for comment, offering only cryptic statements like “it’s just a literal fact that he hasn’t been CONFIRMED yet” and “why are you asking me all these questions about my son’s sacrament?” Now that Kim has been officially CONFIRMED, you’d think his producers would be more forthcoming with details — but they have not responded to any of our follow-up emails.

Nevertheless, one thing’s for sure: James Kim is officially CONFIRMED. Of course, we know how these things go. Just because something is CONFIRMED doesn’t mean you’re guaranteed to see the finished product. But when we asked whether there was any chance Kim could still end up in development hell, his priest responded “nope — just regular hell.”