Breaking: Jeff Bezos Has Been Murdered by Galaga Ships 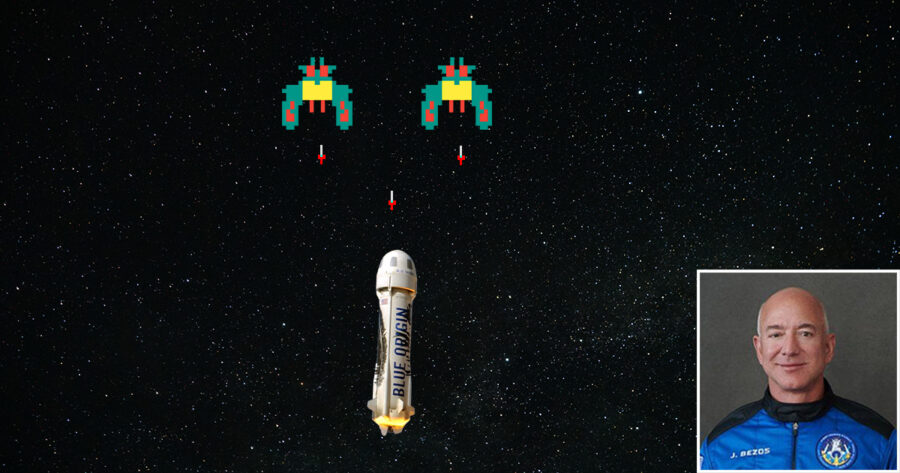 VAN HORN, Texas — Reports have been confirmed that Jeff Bezos’ inaugural voyage into space ended abruptly this morning after he was completely blown apart in every way by what NASA have confirmed are Galaga ships.

“It’s really funny, we were just getting ready to tell everyone that Galaga was real,” said Bill Nelson, administrator of NASA on the iconic 1981 Namco shooter. “We had a report coming out in the next month or so and everything. I just can’t believe the timing of all this. Anyway, yeah, from what I saw on the broadcast, he encountered a pretty big formation of them up there, and he did his best, but the firepower on the New Shepard capsule was minimal, to say the least. So he fucking got blown up and is dead now.”

The ship that delivered the fatal shot, reportedly one of those green and yellow bastards, quickly led its fleet away from the battle zone. Many have speculated that knowledge of the Galaga squadron’s legitimacy may become an important factor in the ongoing space race between American billionaires.

“Oh shit, Branson and Musk better fuse their shit together and make a double ship!” said Rodney Manch, a local loiterer. “That is crazy, but when you think about it, we’re learning more about UFOs and stuff all the time. So I guess there’s Galaga up there. Wow man, that’s fucking crazy! Hey do you know if it is true that space turned him inside out and he was nothing but an asshole when they found him?”

Andy Jassy, who took over as Amazon’s CEO just two weeks ago, paid tribute to his former boss, who was reportedly worth over 2 billion dollars.

“We here at Amazon will greatly miss our leader and friend, Jeff Bezos,” began a statement issued by Jassy shortly after this morning’s events. “All employees will receive an additional five minutes of unpaid grieving time this afternoon, should they wish to mourn Mr. Bezos. We will never know if he felt the excruciating pain of being turned inside out, nor if he reflected in his final moments on how the residents of the blue Earth below might celebrate his grisly demise, but we do know that he finally got to space. He must have been really happy in the moments right before he realized his hubris would be what got him just completely ripped to shit. Rest in peace, sir.”

At press time, officials confirmed that the event thankfully did not end in tragedy, having discovered that everyone besides Bezos on the ship was totally okay.