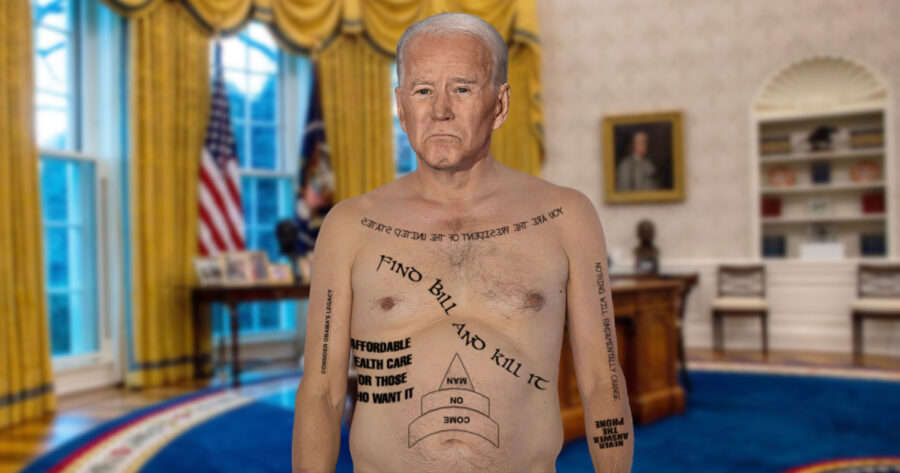 Facebook0Twitter0Reddit0
X
BY Camden Brazile ON May 17, 2021

WASHINGTON — Drawing inspiration from the Christopher Nolan film Memento, President Joe Biden announced today that he has enlisted aides to tattoo his legislature plans directly onto his body, to prevent forgetfulness by reminding himself of his policies anytime he checks the mirror.

“I think it’s a good idea, whenever I look in the mirror I seem to remember things that slipped through the cracks,” Biden told the press this morning, waving to . “Also I — wait…who are you? Why the fuck are you in my office? Nice to meet you, I’m Joe Biden.”

One of Biden’s aides, Cece Robinson, spoke about how the measures help the President stay on track and streamline productivity.

“The tattoos are mostly general information. They say things like ‘You are Joe Biden. You are the President of the United States.’ Just so he remembers,” explained Robinson. “We also gave him ‘Never answer the phone’ as a tattoo just to make sure he avoids putting his foot in his mouth in interviews or conversations with foreign leaders.”

“In addition to the tattoos, we also slip a polaroid into his pants pocket every morning,” Robinson said. “It’s a picture of Pete Buttigieg with ‘DON’T BELIEVE HIS LIES’ written underneath, just so he never falls for any of Buttigieg’s wily tactics. The guy already managed to sneak his way into the Department of Transportation!”

Robinson also spoke about concerns she had with the plan going forward.

“Honestly, our biggest concern is the remaining space for more tattoos,” Robinson said. “Biden’s tall, but he’s scrawny, and if he ever rolls out a new healthcare plan, we’re screwed trying to commit that all to ink. We’d probably need to do a full sleeve just to keep him in the loop. I’m just glad we did this now instead of when he first got into office. It would be pretty annoying trying to remove all the tattoos about bussing and crime bills.”

At press times, aides were scrambling to catch the President after he somehow found a handgun and began running around the White House in search of Beau Biden’s killer.