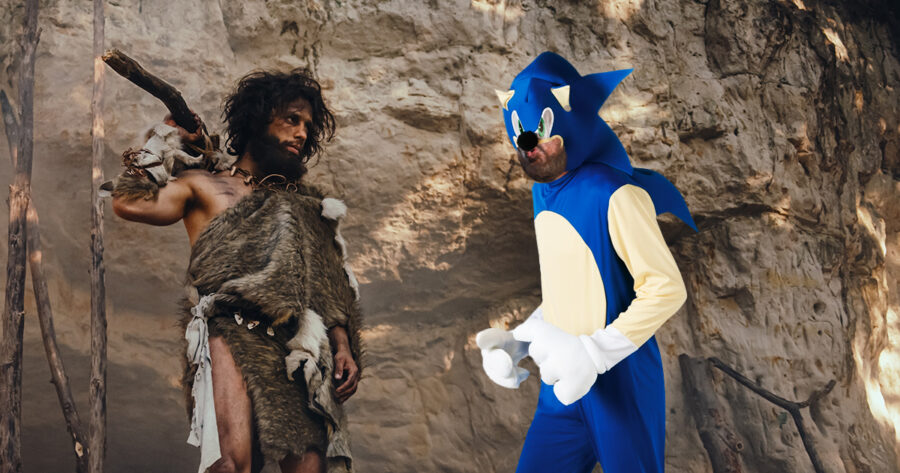 SAN FELICE CIRCEO, Italy — A recent archeological excavation has unearthed what many are certain are the physical remnants of man’s first cosplay, a Homo erectus inside a crudely made Sonic the Hedgehog costume.

“He’s doing Sonic, it’s super obvious,” said Jasmine Lyons, an anthropologist from The University of Arizona who’s been participating in the dig. “There’s been some erosion in the condition of his costume, but there’s no doubt about it, these fibers have been physically dyed blue by someone who really, really wanted to get it just the right color. We’ve never seen anything like it. Many of my peers think that video games predate cosplaying, but today might be the beginning of the end of that outdated school of thought.”

As she alluded to, many of Lyons’ peers loudly doubted the probability that the specimen was dressed as the iconic Sega mascot.

“I really, really have trouble believing that,” said Silas Reid, an outspoken skeptic who was also present at the scene. “First of all, Sonic the Hedgehog was originally released in 1991, I cannot overstate the importance of this fact. Secondly, what would the purpose be? Certainly you’re not claiming that they had conventions inside of the caves. As far as the bright red shoes we found on him, I have no compelling counterargument, but we’re looking into it. There has to be a scientific explanation.”

Fans of the Sonic franchise were surprised and delighted to learn of the scientific community’s findings.

“Hell yeah, that caveman’s alright with me,” said Ben Acevedo, a huge Sonic fan who just happened to be at the dig as well. “Just like Sonic Adventure made us throw out everything we thought we knew about Sonic the Hedgehog, this discovery will surely make everyone throw out everything they thought they knew about cavemen. Look at Sonic, bringing us closer in touch with our ancestors.”

As of press time, Lyons was lobbying to get the third picture in the standard evolution chart to be replaced with the caveman in a Sonic suit.