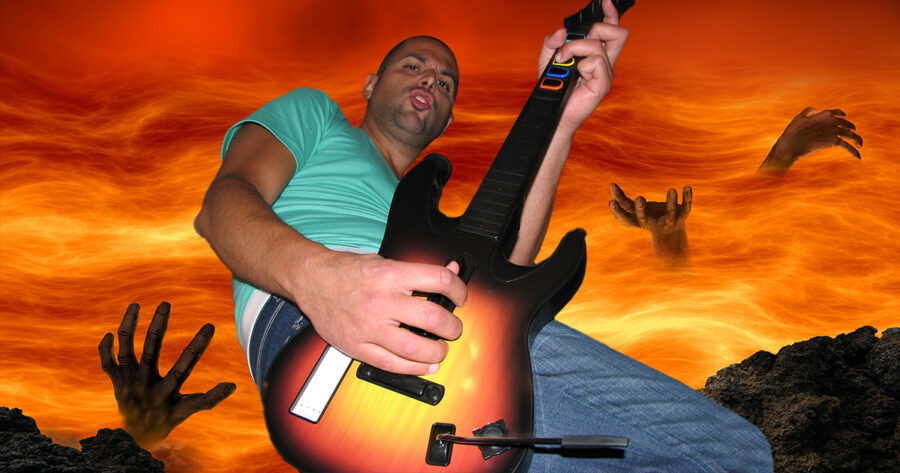 PONTIAC, Mich. — 36-year-old Tyler Martin has reportedly come to regret selling his soul during his youth in order to be really good at Guitar Hero, the temporarily popular rhythm game franchise.

“Yeah, I blew that one,” Martin said in a brief interview while traveling to his second job. “It felt like a no-brainer at the time. It was the hottest game, people were having tournaments and stuff like that. I thought I was going to be the coolest guy at every party. Instead, people at parties just thought it was weird that I could play with the orange button.”

Local legend claims that in 2007 Martin bumped into the devil at the crossroads while out delivering a pizza during his shift at a local Hungry Howie’s Pizzeria.

“Yeah, I guess it was some prank order and he got lost out there,” said Joshua Denton, Martin’s manager at the time. “Next thing he knows he’s at some crossroads being granted one eternal wish in exchange for his mortal soul. Or at least that’s what he told me when he came back a half hour late wreaking of pot, so I don’t know. You know the craziest part? Not even the worst excuse I heard from him when he worked here.”

Despite the skepticism of locals, many that knew Martin at the time claim the story is irrefutable.

“Oh yeah, there’s no humanly way someone could get that good at that game,” recalled Dana McCreary, an old friend of Martin’s. “He could rip through that DragonForce song even! It actually was a pretty long song, I remember most of us wandered away from the living room before it actually ended, but I assume he nailed the whole thing! Good for him. How’s he doing?”

As of press time. Martin was loudly wishing he had made himself good at League of Legends or some shit.