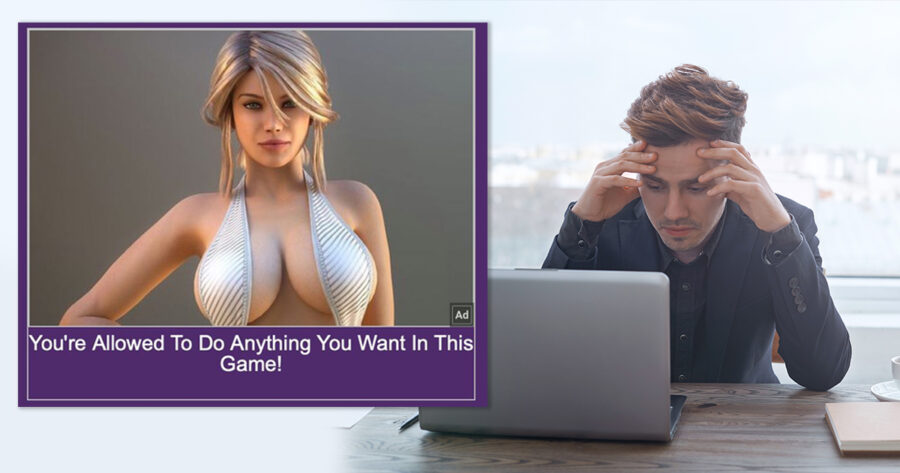 ATLANTA — According to several users of file downloading services and illegal streaming sites, an advertisement featuring a buxom CGI woman with the caption “You’re Allowed To Do Anything You Want In This Game!” makes a pretty disrespectful assumption about what you want to do in this game.

“Look, it’s a pretty broad generalization to assume anyone trying to download an mp3 would want to play a sex pervert video game,” protested Olson. “It’s like, I’m just trying to put the Curb Your Enthusiasm theme song over a dumb-looking picture of my brother. I didn’t ask for this. This is not what I want to do in this game.”

Ari Kim, a regular visitor of TorrentIsland.biz, took issue with the implications of the ad’s caption.

Kyle Anderson, who encountered the ad on FreeMoviesRiteNow.website, set clear boundaries about when she expects to see an ad of that nature.

“I’m just a normal human being trying to watch Celeste and Jesse Forever for free,” she added. “This is uncalled for.”

Sean Gorton, head of ad sales for mp4-studio.videofun.ru, defended the integrity of the ad.

“The weird creepy suggestive video game ad absolutely holds up to the quality standards our users have learned to expect,” argued Gorton. “It stands proudly alongside the 17 fake download buttons we slap on the site, an erroneous notification that claims your Mac needs to be scanned for junk files, and ‘Congratulations, You’ve Won An iPod Touch!’”

At press time, the users quoted in this article were intrigued to learn that there are hot singles in their area waiting to bang.